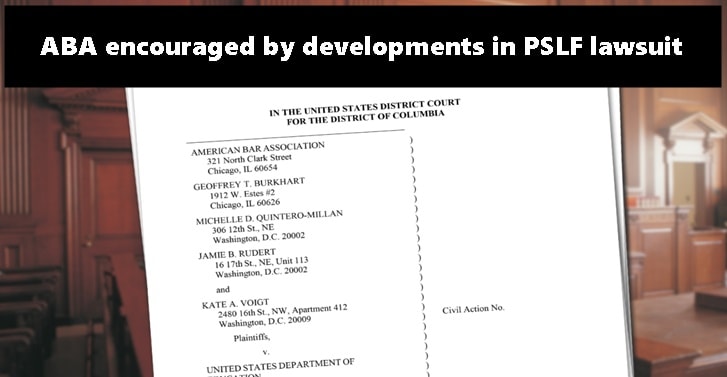 The American Bar Association received some good news last week in its battle with the Department of Education over its administration of the Public Service Loan Forgiveness Program (PSLF).

The ABA and four employees who perform public service, represented by global law firm Ropes & Gray, sued the Education Department and the Secretary of the Department of Education in December 2016, alleging mismanagement of the PSLF program.

Several ABA employees, including two former employees, received communications from FedLoan Servicing, which administers PSLF, that said the ABA is an eligible employer under the PSLF and that FedLoanâs previous determination that it was not had been an error. These letters follow a February 2019 ruling from U.S. District Judge Timothy J. Kelly that the U.S. Department of Education had improperly changed the terms of the PSLF for some individuals who have dedicated their careers to public service.

âWe are gratified that several affected employees have been notified their work with the American Bar Association qualifies as public service work under PSLF,â ABA Executive Director Jack L. Rives said. âWe will continue to work with Ropes & Gray to ensure these and other ABA employees get full credit for their public service work.â

The lawsuit detailed how the department changed eligibility requirements for work that was clearly âpublic serviceâ after previously approving the same work, and after individuals had made major life decisions based on those prior approvals.

âWe are pleased that the Department of Education has decided not to appeal Judge Kellyâs order, and has instead started restoring loan payment credits to affected public servants,â Ropes & Gray partner Chong S. Park said. âThe department is finally doing the right thing and the positive impact this has on our individual plaintiffs â and other student loan borrowers in similar positions â is very encouraging.â Â

The PSLF program, enacted in 2007 and signed into law by President George W. Bush, provides incentives for graduates to pursue full-time public service careers. It provides a mechanism to forgive student loan debt balances for men and women who make timely loan payments for 10 years while working full-time in public service jobs.
Â