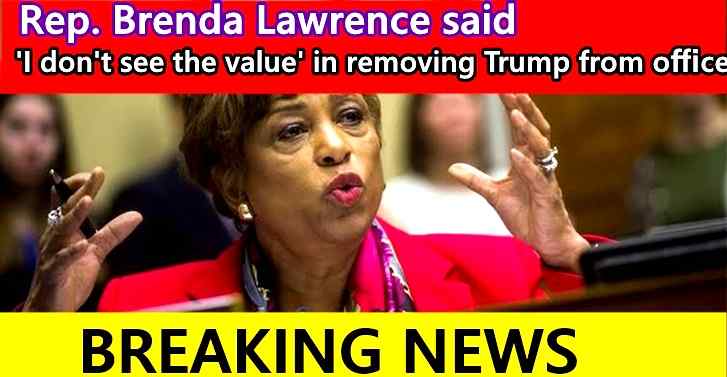 Michigan Democratic Rep. Brenda Lawrence said Tuesday she remains supportive ofÂ the Democratic-led impeachment inquiryÂ following comments over the weekend in which she said she preferred censuring Trump to impeaching and removing him from office.

"We're so close to an election. I will tell you, sitting here knowing how divided this country is, I don't see the value of taking him out of office, but I do see the value of putting down a marker saying his behavior is not acceptable," Lawrence said SundayÂ on "No BS News Hour" with Charlie LeDuff. "It's in violation of the office and the oath of office of President of the United States, and we have to be clear that you cannot use your power of the presidency to withhold funds to get a foreign country to investigate an American citizen for your own personal gain. There's no way around that."I want him censured," she added. "I want it on the record that the House of Representatives did their job and they told this President and any president coming behind him that this is unacceptable behavior and under our Constitution, we will not allow it."

During the same interview, the congresswoman said that based on the interviews and documents she has seen, there is "significant evidence" to impeach. On Tuesday, Lawrence's office put out a statement affirming her support for impeachment."I was an early supporter of impeachment in 2017," she said in the statement. "The House Intelligence Committee followed a very thorough process in holding hearings these past two weeks. The information they revealed confirmed that this President has abused the power of his office, therefore I continue to support impeachment. However, I am very concerned about Senate Republicans and the fact that they would find this behavior by the President acceptable."

Lawrence reiterated her support for impeachment to CNN's Erin Burnett on "OutFront" Tuesday night, but held that she would rather have the Senate censure, Trump than take a vote that would potentially absolve him."Privately, the Republicans are saying, 'Yes, it's not right. He's done something wrong, but I'm -- it's just not impeachable.' We have to put a marker down, so I'm going to do my job in the House and when it gets to the Senate, I was putting out there that this is a way for history to reflect that this President and any president from now on -- this is unacceptable," she said. Republicans -- including presidential counselor Kellyanne Conway -- cited Lawrence's comments as an indication of faltering support for impeachment process, though Democrats have by-and-large appeared at least publicly in lockstep support of the investigation.

AÂ new CNN poll conducted by SSRSÂ and released Tuesday public opinion over whether the President ought to be impeached and removed from office remains exactly the same as it was in October even after five days of public hearings.