4th Circuit upholds search of home based on one web click 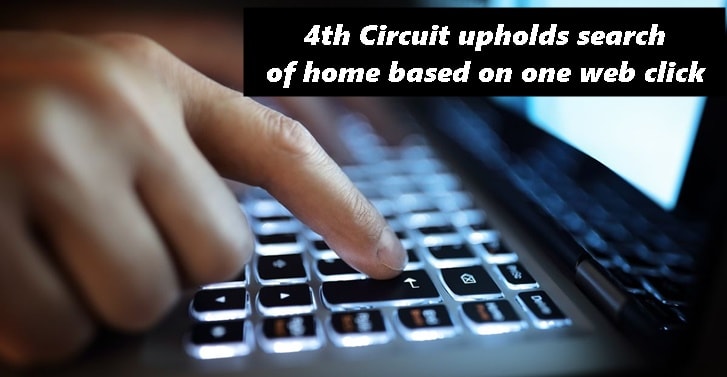 A federal appeals court has upheld a home search based on a single click to a website that posts child pornography videos.
The Richmond, Virginia-based 4th U.S. Circuit Court of Appeals ruled 2-1 last Thursday that there was sufficient probable cause to justify the April 2016 search warrant, report Law360 and Courthouse News Service. How Appealing noted the decision.

The decision raises concerns, according to Electronic Frontier Foundation staff attorney Aaron Mackey. âLinks can be created and propagated throughout the internet, and we may not know their origin,â Mackey told Courthouse News Service. âThey might be shared with you; they could be used for pranks or criminality. That is a problem.â

The 4th Circuit ruled in the case of Nikolai Bosyk of Purcellville, Virginia, who is serving a five-year sentence for receiving child pornography after investigators found images and videos on electronic devices at Bosykâs home. Bosykâs guilty plea reserved the right to challenge the search on appeal.

Judge Albert Diaz, an appointee of President Barack Obama, wrote the majority opinion. Someone using an IP address associated with Bosykâs home had clicked on the link in November 2015 on the same day it appeared on a child-porn message board.

Accompanying the link on the bulletin board âwas a message describing its contents unmistakably as child pornography, as well as numerous thumbnail images depicting sexual molestation of a female toddler,â Diaz said. âThis context provides evidence about the probable knowledge and intent of the user that is otherwise lacking from the face of the URL.â

But the majority cited a âseries of plausible inferencesâ establishing probable cause.

Probable cause doesnât require officers to rule out innocent explanations for suspicious facts, the majority said.

Bosykâs lawyer, William Ashwell, will seek a rehearing en banc and plans to seek cert with the Supreme Court, if necessary.