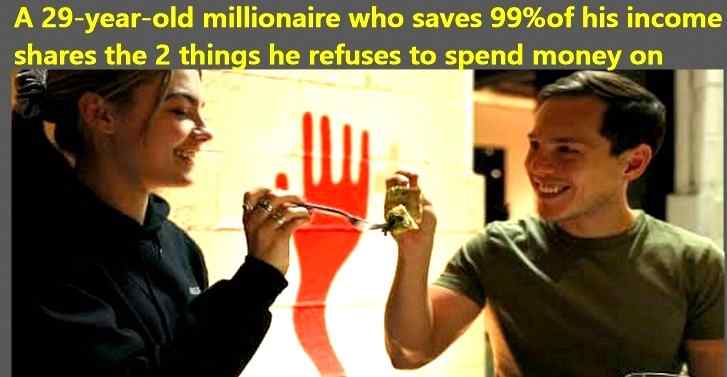 Still, the YouTube star and real estate investor is careful with his cash. âIâve always enjoyed the aspect of not spending money, even as a kid,â he tellsÂ CNBC Make It, adding, âI end up saving about 99% of my income, just because my income is so high, and I keep my expenses so low.âStephan, whose net worth crossed $1 million for the first time at 26, keeps his costs down partly by refusing to spend on two things: âNumber one is coffee. I think the markup of coffee at Starbucks and Coffee Bean and a lot of those places out there is absolutely ridiculous, so I just make it at home for 20 cents.âHe buys his coffee at Smart & Final, where he can get a large bag for âlike half the priceâ of other grocery stores, he says.

''I end up saving about 99% of my income, just because my income is so high and I keep my expenses so low", Graham Stephan.

Secondly, âdesigner clothing is one of those things that I will never spend money on,â says Stephan. âI just donât see the point in spending $700 on Gucci shoes when you could go to Aldo or Call It Spring or H&M and get very similar shoes for one, one-hundredth of the price.âStephan also saves money by price shopping for groceries at Trader Joeâs, Ralphs and Smart & Final, and when he goes out to eat, he typically splits a meal with his girlfriend.

He doesnât just focus on the small stuff, though â to save the majority of his income, he finds creative ways to cut back on major expenses, like housing and transportation. He rents out the other half of the duplex he owns so that âit basically works out to be a free place for me to live,â he explains.

He bought a Tesla Model 3, which starts at $35,000, in April 2019 â but, in a way, Stephan argues, the car was free. He made aÂ YouTube videoÂ about the purchase that ended up going viral, he says, and the video itself âpaid for the entirety of the car.âStephan is the first to admit that heâs âextreme in terms of saving,â and he takes pride in it. âNo one is more frugal than me.â

To become a millionaire, âyou donât need to skimp on every purchase,â he adds. âYou donât need to work 12 hours a day. But you do need to think outside the box. â¦ What works for me wonât necessarily work for everyone. I donât think thereâs a one-size-fits-all approach, but you do need to think creatively and do something different than what most people are doing.â