A California surgeon and his girlfriend accused of raping women. 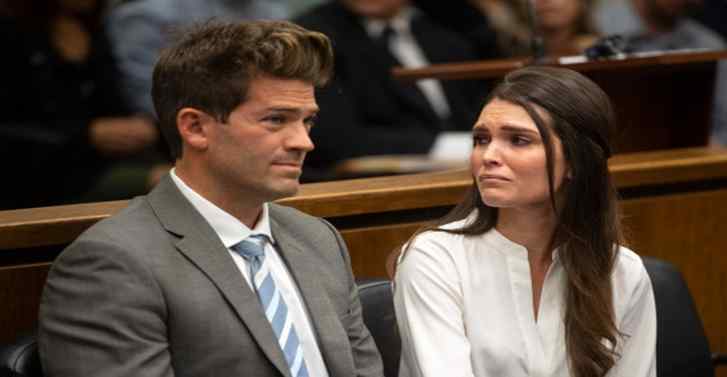 First, they were accused of drugging and raping women while recording their exploits on a cell phone.Dr. Grant Robicheaux and his girlfriend, Cerissa Riley, had their lives "destroyed" by the allegations, their lawyer said. Then the case took a bizarre turn last week when a new prosecutor said he wouldÂ drop charges against the California coupleÂ -- citing insufficient evidence and claiming the previous DA used the case for political gain. But Riley and Robicheaux, an orthopedic surgeon andÂ former reality TV showÂ personality, aren't guaranteed freedom. Even though the prosecution and defense actually agree in this case, the judge isn't so certain. And that gives hope to some of the couple's accusers.

"My client believes in her heart of hearts that she was the victim of sexual assault," said attorney Michael Fell, who represents a woman known as Jane Doe #4.

"She does not waver whatsoever."

The big surprise in court

Robicheaux and Riley celebrated what seemed to be their imminent freedom on national TV last week.

"I feel like I finally woke up from a bad nightmare," Riley told ABC's "Good Morning America" in anÂ interviewÂ that aired Friday. "I feel like I can breathe again."

"Still can't believe this happened to us," Robicheaux said. The same day, the Orange County district attorney's office made a motion to dismiss the case in front of Superior Court Judge Gregory Jones. But instead of granting that motion, as many expected, the judge took it "under submission" and allowed more time for all parties to present more facts, Fell said. The judge also ordered discovery to be turned over to the alleged victims' attorneys "so that we could evaluate the facts of the case, which, quite frankly, we haven't had access to at this stage of the game," Fell said.

The couple said they were swingers, not criminals

Robicheaux and Riley told "Good Morning America" they participated in a swingers lifestyle. But they insisted none of the women they'd had a sexual relationship with were too inebriated to consent.

"It was never a question," Robicheaux said.

Since charges were filed in September 2018, the couple's lives have been in shambles, their attorney Thomas M. Ferlauto said. Robicheaux, who was featured in an episode of Bravo's "Online Dating Rituals of the American Male" in 2014, had his medical license suspended and lost his job. Orange County District Attorney Todd Spitzer said the case against the couple was fueled by his predecessor, Tony Rackauckas, trying to gain support for his re-election campaign.

"There is not a single piece of evidence or video or photo that shows an unconscious or incapacitated woman being sexually assaulted," said Spitzer, the new prosecutor.

"I didn't create this situation, but it's my responsibility to fix it," Spitzer said.

"Grant and Cerissa's lives were destroyed by the prior administration's misuse of the justice system," Ferlauto, the couple's attorney, said. But former district attorney Rackauckas denied Spitzer's claim that he used the case for political gain.

"I never made a single decision or statement about the case for any political motive," Rackauckas said in the last week. Rackauckas said he believed the women's complaints based on the evidence he had.

"I just feel terrible for the women who had the courage to come forward and give their evidence to the authorities in this case," the former DA said.

"It's hard for them to make these reports about things that were so very humiliating in the first place then have to relive the pain," he said.

"Certainly, any prosecutor should think long and hard before dismissing such a case where multiple women have independently come forward and subjected themselves to the hard process of (baring) their souls to the authorities."