A boy and his 3 cousins went missing after a blizzard in rural Alaska. They dug a hole to survive 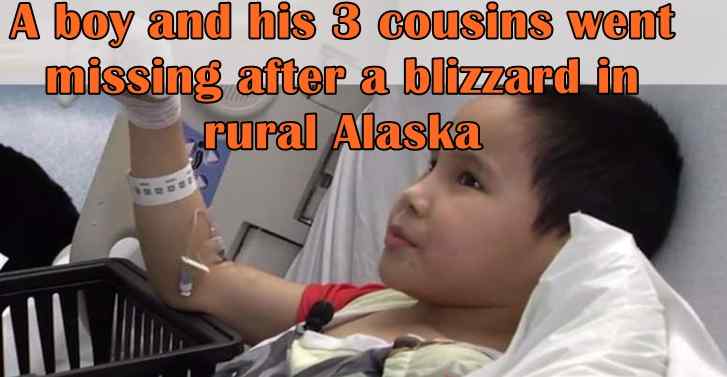 A 7-year-old Alaska boy whoÂ went missing with his cousinsÂ after a blizzard said they survived by digging a hole to sleep. Ethan Camille, 7, and his cousins, Christopher Johnson, 14; Frank Johnson, 8; and Trey Camille, 2, went missing last week during a snow-machine ride in rural Alaska. They spent the night together before they were rescued the next day about 20 miles outside the village of Nunam Iqua on Alaska's west coast. From his hospital bed at the Alaska Native Medical Center, Ethan recounted how he and his cousins tried to survive. Ethan's mother said the boys' focus was on protecting Trey.

"First, we were trying to find a way home, and we got cold," Ethan toldÂ last week.Â Ethan's mother said he suffered frostbite trying to protect his 2-year-old cousin from the cold.

"We were trying to dig a hole" and they slept there, he said from the hospital, where he was being treated for frostbite on his fingers.

Irene Camille said Christopher wanted to hold the 2-year-old in the hole. So, Ethan moved to the doorway to make room for the toddler. She said the cousins tried to "protect the baby till the end." "They sacrificed their health, their everything" to make sure Trey would survive, she said. The four were appropriately dressed but there was still reason for concern, officials said. Ethan's mother recalled "people hollering and screaming and clapping" after their rescue. Christopher was being treated at Providence Alaska Medical Center. His brother, Frank, and Trey are back at home.

"They're my babies. I don't ever want anybody to go through what they did," Irene Camille told the station. She said she woke up a few times one night to stare at Ethan to "make sure he was really there." Ethan sat upright in his bed at the Anchorage hospital. A teddy bear and an Iron Man action figure were in front of him. He wrapped his bandaged hands around a jet, flying it from some imaginary place, landing the aircraft on his forehead.

Correction: A previous headline mischaracterized how the children were related. Three of them are siblings; one is their cousin