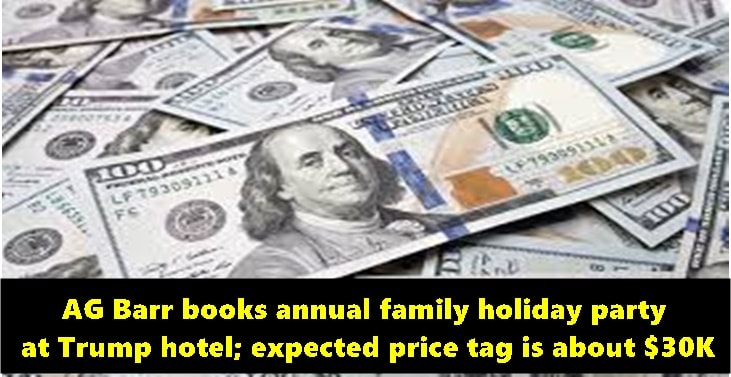 U.S. Attorney General William Barr is expected to invite about 200 people to his annual family holiday party and spend about $30,000 on the affair.

Barr is picking up the tab, according to a Department of Justice official who spoke with the Washington Post. The official didnât want to be named because the party is not a DOJ event.

Barr chose Trumpâs hotel after learning that other possible locations were already booked.

âCareer ethics officials were consulted, and they determined that ethics rules did not prohibit him from hosting his annual party at the Trump hotel,â the official told the Washington Post.

Liz Hempowicz, director of public policy at the nonprofit Project on Government Oversight, is criticizing Barrâs decision. âIt creates the appearance that high-level political appointees or allies of the president may feel like they need to spend money at the presidentâs businesses as a show of loyalty,â she told the Washington Post.

The party will feature a buffet and a four-hour open bar. The annual party features a ceilidh, defined as a social event that includes Scottish or Irish folk music.

Barr plays the bagpipes, according to a story from the New Yorker. He demonstrated his skills in June before delivering remarks to a national conference of U.S. attorneys.
//www.abajournal.com/news/article/ag-barr-books-his-annual-family-holiday-bash-at-trump-hotel-expected-price-tag-is-30k