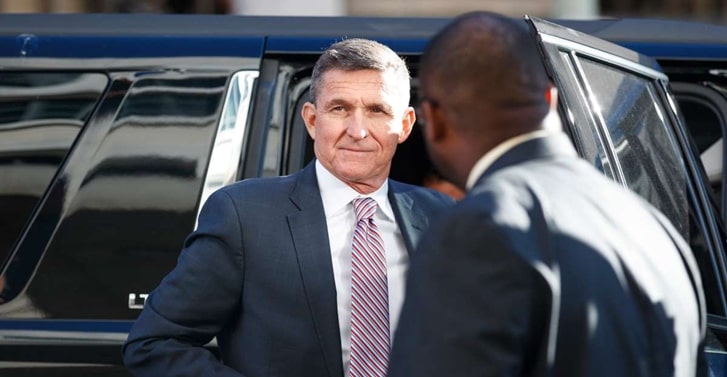 WASHINGTON âÂ A federal appeals court in Washington, D.C., has agreedÂ to rehear the case of Michael Flynn, a move that could resume the challenge to the Justice Department's controversial decision to abandon its prosecution of President Donald Trump's former national security adviser.Â In a 2-1 decision last month, a three-judge panel from the appeals court ordered U.S. District Judge Emmet Sullivan to dismiss the case against Flynn, who pleaded guilty in 2017 to making false statements to the FBI and later reversed course, claiming he was innocent all along. The ruling was applauded by both Flynn's attorneys and the Justice Department, which has sought to dismiss the case.Â The full appeals court on Thursday granted a request from Sullivan to rehear the case and scheduled oral arguments for Aug. 11.Â Rehearing a case that had already been ruled on is very rare, a request granted only inÂ proceedingsÂ that involveÂ "a question of exceptional importance" and when the court feels the need to "maintain uniformity" in its decisions.The development is the latest in the Flynn case, which began three years ago as a seemingly straightforward prosecution of a defendant who admitted lying to the FBI but has devolved into a politically fraught and tangled saga that recently pitted one branch of government against another.Sullivan, who has been overseeing Flynn's case for three years, had appointed aÂ third party, known as an amicus, to challenge the Justice Department's motion to dismiss the case and to determine whether Flynn had committed perjury for claiming he isÂ innocent of a crime to which he had previously pleaded guilty.The move set off an unusual legal battle in the appeals court, where both the defense and prosecution wanted to dismiss the case whileÂ the presiding judge â himself represented by an attorney âÂ argued he's entitled toÂ scrutinize the Justice Department's motives for dropping the prosecution.

In the ruling last month ordering Sullivan to dismiss the case, Trump-appointed D.C. Circuit Court Judge Neomi Rao,Â called Sullivan's actions "unprecedented intrusions on individual liberty" and on the Justice Department's prosecutorial powers.RaoÂ described Sullivan's decision to appoint an amicus a "mistaken understanding" of a judge's role. Sullivan's intentÂ to "scrutinize the reasoning and motives of the Department of Justice constitute irreparable harms that cannot be remedied on appeal," said Rao.The case, Rao said, is about whether a judge may prolong a prosecution by appointing a third partyÂ and probing the government's motives:Â "On that, both the Constitution and cases are clear: He may not."DOJ abandons Flynn prosecution:DOJ drops case against former Trump adviser Michael Flynn in boldest step yet to undermine Mueller probe"The court has appointed one private citizen to argue that another citizen should be deprived of his liberty regardless of whether the Executive Branch is willing to pursue the charges," Rao wrote.Sullivan's attorney, in the request for the full court to reexamine the ruling,Â said theÂ panel's decision circumvents Supreme Court precedent about separation of powers between the judiciary and executive branches of government."The panelâs decision threatens to turn ordinary judicial process upside down. It is the district courtâs job to consider and rule on pending motions, even ones that seem straightforward. This Court, if called upon, reviews those decisions â it does not preempt them," the attorney, Beth Wilkinson, wrote.Flynn pleaded guilty in 2017 to lying to the FBI about his communications with a former Russian ambassador, but later reversed course, claiming investigators entrapped him into making false statements.Â

The government, too, reversed course, andÂ sought to dismiss the case. The Justice Department, whichÂ tapped an outside prosecutorÂ to review the case, argued that the January 2017 interview, during which Flynn made false statements to the FBI, was "unjustified."Attorney General William Barr, who tapped Jeff Jensen, the U.S. attorney in Missouri's eastern district, to review the Flynn case, testified earlier this week that the FBI interview that led to criminal charges "was untethered to any legitimate investigation."Flynn's attorneys have seized on recently disclosed FBI notes and documents that show internal discussions among investigators and Justice Department officials about whether to prosecute Flynn.Â His legal team described the documents as smoking-gun evidence â kept away from defense attorneys â that FBI agents and Obama administration officials targeted Flynn without evidence of a crime.Â One recently declassified document showed handwritten notes of a Justice Department officialÂ recounting that FBI agents thought Flynn believed what he told them was true.Â The documents, many of which were heavily redacted, were declassified in recent weeks as part of Jensen's review.Flynn is one of half-dozen Trump associates who were charged as a result of former special counsel Robert Mueller's investigation on Russia's interference in the 2016 presidential election.Another is Roger Stone, who was convicted of lying to Congress and obstructing its Russia investigation to protect Trump. Stone escaped imprisonment after TrumpÂ commuted his sentenceÂ â the first such action by the president that circumvented the justice system in a case directly tied to himself.The Justice Department's handling of the cases of Flynn and Stone have spurred criticisms that the agency has become a political annex of the president intent on delegitimizing what he saw was an unfair investigation of him and his campaign.