As Trump Campaigns on Law and Order, Barr Rolls Out Crime-Fighting Initiatives 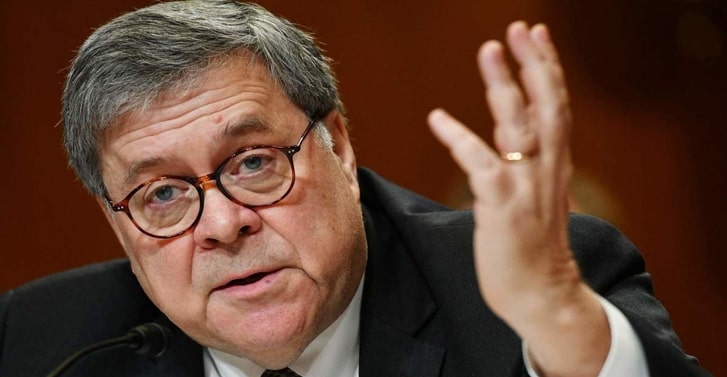 WASHINGTON - Attorney General William Barrâs enthusiastic support for President Donald Trumpâs law and order agenda during the final months of a presidential campaign is sparking debate about the appropriate role of his department in electoral politics.Â When Trump visited Kenosha, Wisconsin, last Tuesday to tour damaged businesses and to announce more than $40 million in emergency funding for public safety for Kenosha and Wisconsin, he brought Barr with him. Â Â Â Â Echoing Trump's campaign rhetoric about a militant takeover of the protests over racial injustice and police brutality, Barr told a gathering of local leaders that it was under Trump's direction that he had only days before assembled a group of federal agents to dispatch to Kenosha. The city was badly scarred by several days of violent protest and riots after a police officer repeatedly shot African American Jacob Blake on Aug. 23, partially paralyzing him.Â âThe federal government is willing to use all our tools, all our laws to bring these people to justice," Barr said. Â Â Â Barr has been a frequent figure alongside Trump in recent months, as the president has focused on the protests to help shift attention away from the pandemic and economic crisis and offer himself to voters as a tough-on-crime candidate. As the race for the White House between Trump and his Democratic rival, former vice president Joe Biden, has picked up steam, Barr has mobilized federal law enforcement Â and rolled out a series of initiatives to promote Trumpâs âlaw and orderâ reelection theme.Â For instance, on July 8, Barr announced a crime-fighting initiative called Operation Legend, named after four-year-old LeGend Taliferro, who was shot and killed while he slept early on the morning of June 29 in Kansas City. As part of the initiative, the Justice Department has sent agents to nine cities around the country to help local law enforcement combat a surge in shootings and homicides. While Democrats have accused Trump of leveraging Operation Legend as a campaign prop, Barr said during a July congressional hearing that it was actually rolled out under a different name last December. Â To date, the operation has netted about 1,500 arrests, with nearly 500 people charged with various federal crimes, according to the Justice Department. Â Â

More recently, the Justice Department started investigating the leaders and financial backers of violent protests around the country, Chad Wolf, the acting director of homeland security, said in a recent interview with Fox News. Â The announcement followed assertions by Trump and top law enforcement officials that out-of-state extremists have organized the protests.While the crackdown on rioters and violent criminals reflects Trump's longstanding tough-on-crime policies, Democrats and other critics say Barr has directed the actions in an attempt to aid Trump's election."This is not something that the Department of Justice should be doing,â said Nick Akerman, a former federal prosecutor and member of the Watergate prosecution team now a partner at the law firm of Dorsey & Whitney . âThe idea that the attorney general is part and parcel of this is absolutely outrageous and puts him right in the middle of this presidential campaign."Â Barr, a conservative Republican who became Trumpâs second attorney general last year, has consistently rejected such criticism. During a testy House Judiciary Committee hearing on July 28, Barr disputed Democratsâ claims that his departmentâs actions were aimed at supporting the presidentâs re-election campaign.Â Â âIâve made it clear that Iâd like to pick cities based on law enforcement need and neutral criteria,â Barr said. Had local authorities in Portland, Oregon been doing their job to protect an embattled federal courthouse in the city, there would be no need for additional federal agents, he said. âWe are on the defense. Weâre not out looking for trouble,â Barr said. Â Â Â

Portland residents have held nightly protests since late May, when an interaction with Minneapolis police led to the death of a Black man, George Floyd. Â Some of the protests have resulted in property damage and clashes with police.Â In modern times, the attorney general, while a member of the president's cabinet, has often shunned involvement in electoral politics. Â The Justice Department prohibits officials from taking actions that might influence the outcome of an election, a policy Barr says he'll adhere to. Â Â Â Â Paul Rosenzweig, a former Justice Department official now with the libertarian R Street Institute in Washington, said Barr has injected himself into the president's re-election campaign. Â Â Â "I don't recall any attorney general in recent memory since [former president Richard Nixon's attorney general] John Mitchell being so active in the campaign," Rosenzweig said. Â Â Â Barr's spokeswoman, Kerri Kupec, did not respond to a VOA request for comment.Â Â Even before nationwide protests broke out in May over Floydâs death while in police custody in the city of Minneapolis, Barr was among Trump's staunchest allies. In April, Barr praised Trump's widely criticized handling of the COVID-19 pandemic as "statesmanlike."Â Â Â Â On June 1, Barr ordered federal agents and National Guard troops to clear out demonstrators gathered outside the White House so the president could walk across the street and pose for a photo outside a church. Â Â Â Barr faced a firestorm of criticism over the move but defended his decision, saying the protesters had grown increasingly belligerent.Â Â After Trump issued an executive order in late June directing enhanced security at federal monuments and buildings, Barr and Wolf sent armed agents to Portland and Seattle. Â Â Â While most agents have since left those cities, the Justice Department continues to charge people in connection with the violent protests around the country. Â Â Â As of Wednesday, 228 people have been charged with federal crimes related to the unrest, many of them in Portland, according to the Justice Department. Â The charges range from assaulting a federal officer to arson. Â Â Â Kimberly Wehle, a former federal prosecutor who is now a law professor at the University of Baltimore, said Barr has left an unmistakable mark in recent months while bolstering the presidentâs campaign strategy. Â Â Â "Attorney General Barr is the top law enforcement official at federal level,â Wehle said in an interview. âSo what he says and how he implements the policy is pretty much the bottom line when it comes to federal domestic law enforcement.âÂ