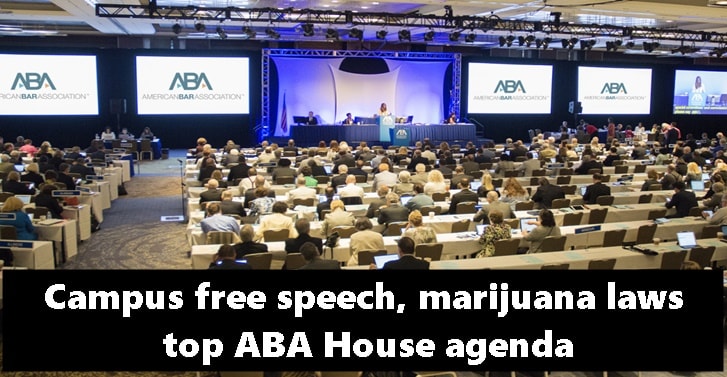 The American Bar Association House of Delegates will consider proposals at the upcomingÂ ABA Annual MeetingÂ that urge free speech on college campuses, call for leadership in resolving the âcurrent stalemateâ between federal and state marijuana laws and recommend several changes to immigration laws.

The House, which determines association-wide policy, is made up of 594 delegates from state, local and other bar associations and legal groups from across the country. It will meet at the San Francisco Marriott Marquis Aug. 12-13 to close the 2019 Annual Meeting, which begins Thursday. Altogether, nearly five dozen proposals are on the Houseâs agenda.

Resolution 10C urges colleges and universities to protect all members of their communities and all speakers on their campuses and other locations from censorship, intimidation or retaliation based on their opinions or beliefs. With states continuing to relax marijuana laws,Â Resolution 104Â urges an end to conflicts between these state laws and federal law, which classifies marijuana as a Schedule I controlled substance that has a high potential for abuse, lacks medical value and canât be safely prescribed.

Other notable proposals include Resolutions 106 and 115B that urge fairness in employment based on gender and sexual orientation and Resolution 114 that would put the ABA on record as rejecting any requirement that sexual assault victims have a legal burden of verbal or physical resistance.Â