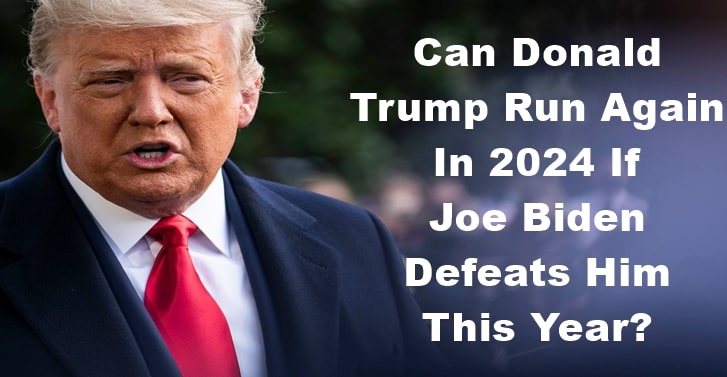 Just not Americans, while the entire world is eying the results of US Election 2020, it is still hung in balance as several states are still counting ballots.

While the counting is still ongoing 24 hours after the Us Election 2020 began and American media is projecting Democratic Challenger Joe Biden with a narrow lead, question that has generated curiosity among people is that if US President Donald Trump loses this year, can he participate in the 2024 race to the White House. While five key battleground states are still counting, as of now, the Associated Press has projected Biden leading with 264 electoral votes with Trump at 214. However, thousands of votes are still not counted in Alaska, Pennsylvania, Georgia, North Carolina and Nevada.Â

According to the United States constitution, if Joe Biden defeats Donald Trump in 2020, the Republican leader can run again for future presidencies. The 22nd Amendment of the American constitution has stated that âNo person shall be elected to the office of the President more than twice," but it does not mention if those two terms have to be consecutive.

Thus, leaving the door open for Trump to participate in the race for White House in 2024 even after his four-year term ends this year as it has also been done in the past. However, the winner has not yet been called officially.Â

Former US President Grover Cleveland served two terms at the White House with a gap of four years. He was the 22nd US President and was elected in 1884. But, since he lost to Republican rival Benjamin Harrison in 1888, Cleveland ran again in 1892 for the coveted position and became the 24th US President. This is also the only time such practice has been followed by a presidential candidate in the history of the United States.Â

WillÂ Trump run for another term if he loses?

While there is no official statement regarding this prospect, former White House chief strategist Steve Bannon told The Australian just last month that the idea has been already floated within the Trump campaign. The former aide told the media outlet that if US President loses in 2020, he will likely run again at the age of 78.

"I'll make this prediction right now: If for any reason the election is stolen from or in some sort of way Joe Biden is declared the winner, Trump will announce he's going to run for re-election in 2024," he said. "You're not going to see the end of Donald Trump."