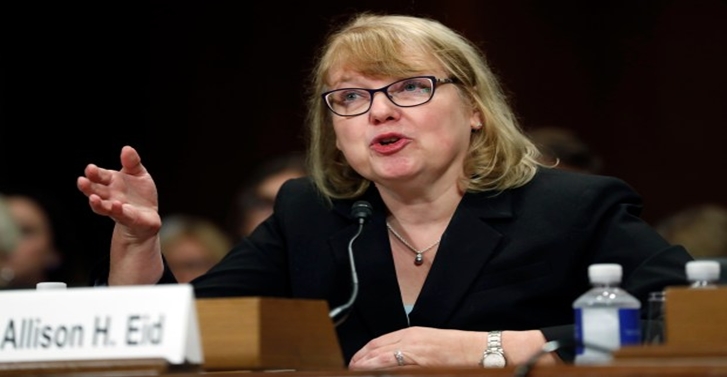 President Donald Trump wants to nominate a woman to the U.S. Supreme Court by the end of the week to replace the late Justice Ruth Bader Ginsburg, and he could turn to former Colorado Supreme Court Justice Allison Eid to fill that role.Colorado Supreme Court Justice Allison Eid speaks during a Senate Judiciary Committee hearing in Sept. 2017 in Washington, D.C.The conservative jurist already earned Trumpâs support once, in 2017, when he nominated her to her current position as a judge on the 10th U.S. Circuit Court of Appeals. Before that, heâd named her in 2016 to a short list of people heâd consider for the U.S. Supreme Court, before eventually nominating another Coloradan, Neil Gorsuch.Eidâs name is among four dozen included on TrumpâsÂ current list of high court candidates, andÂ USA Today reported over the weekendÂ she likely was one of five women on the presidentâs short list. More recently,Â speculation has focusedÂ on Judge Amy Coney Barrett of the 7th Circuit as the front-runner, followed by Judge Barbara Lagoa of the 11th Circuit.Local legal experts said Eid is viewed as a reliable conservative vote who is well-qualified and politically connected.âIâd call her a textualist, and originalist,â said Chris Murray, a shareholder at the Denver firm Brownstein Hyatt Farber Schreck. âSheâs certainly one of those where, if she likes the law or doesnât like the law, it doesnât matter to her. What matters to her is, can she figure out what it says?âSen. Cory Gardner has been a staunch supporter of Eid for years, and Sen. Michael Bennet also voted in favor of her appointment to the 10th Circuit, although he expressed reservations at the time over her âconservative judicial philosophy.âShe previously clerked for U.S. Supreme Court Justice Clarence Thomas, who in 2006 recommended her to then-Gov. Bill Owens for a spot on the state Supreme Court. Eidâs husband formerly served as Owensâ chief counsel.During the about 11 years she served on the state Supreme Court, Eid regularly took positions on the conservative side of the spectrum, and some, like the liberal advocacy group Alliance for Justice, have described her as âultraconservative.ââShe had an incredibly conservative, dangerous record on the Colorado Supreme Court and sheâs continued to be conservative on the 10th Circuit,â said Daniel Goldberg, legal director at the Alliance for Justice. âItâs no surprise sheâs on the presidentâs short list.â

In one notable case on the Colorado Supreme Court, Eid wrote a dissenting opinion in 2015 that supported school vouchers in Douglas County that many parents planned to use to pay for education at religious institutions. The court struck down the program, finding it conflicted with the state Constitutionâs prohibition on using public money for religious schooling. Eid disagreed, arguing in part that the courtâs interpretation of the state Constitution was too broad.âThe language (in the Constitution) does not compel this result,â she wrote, adding that while the Constitution forbids public expenditures âto help support or sustainâ church or sectarian schools, âIt does not suggest, as the plurality would have it, that any program that provides public money for other purposes â for example, to assist students â is constitutionally suspect simply because the funds indirectly or incidentally benefit church or sectarian schools.âEid did not return a request for comment Monday. Murray described Eid as well-respected by both those who agree and those who disagree with her, and said he believes she would âlament how political judging has gottenâ. He described her as mainstream.âSheâs the kind of judge you would expect from a Republican president, any Republican president,â he said. âMitt Romney, if he would have won, probably would have picked someone like Allison Eid.âIf Eid were to be seated on the U.S. Supreme Court and join Gorsuch, it would be the first time in history that two Coloradans served as Supreme Court justices at the same time.