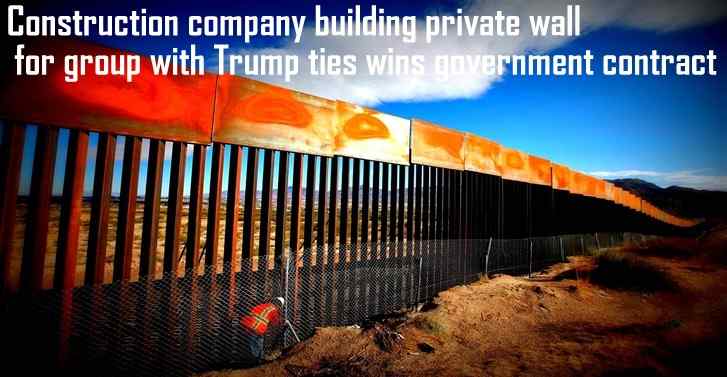 A company touted by White House officialsÂ -- and that's already building sections of border wall for a private group with Trump administration ties -- has beenÂ awarded $400 million by the governmentÂ to design and build part of President Donald Trump's border barrier in Yuma County, Arizona.The Pentagon on Monday announced that North Dakota company Fisher Sand and Gravel was awarded a contract to "design-build border infrastructure along the southern perimeter of the Cabeza Prieta National Wildlife Refuge" in Arizona by the end of 2020. The company had previously been approved by the Pentagon as an eligible vendor for wall projects.

Fisher Sand and Gravel is currently building roughly 3 miles of wall on private land for the private group We Build the Wall, which backs the President's push for erecting a barrier along the southern border. A number of the President's supporters are part of We Build the Wall, including former White House adviser Steve Bannon and former Kansas Secretary of State Kris Kobach. The Pentagon announcement is the first government contract to Fisher to build part of the administration-funded border barrier, which has formed a centerpiece of Trump's platform. News of Fisher's contract with the US Army Corps of Engineers was also tweeted on Monday by Brian Kolfage, who runs We Build the Wall.

While the President hasÂ publicly touted Fisher in the past, the company has a history of red flags -- including more than $1 million in fines for environmental and tax violations. A decade ago, a former co-owner of the company pleaded guilty to tax fraud and was sentenced to prison.The company also admitted to defrauding the federal government by impeding the IRS. The former executive, who's a brother of the current company owner, is no longer associated with Fisher.

Asked by CNN in MayÂ to comment on the company's history of environmental violations and legal issues, the company said in a statement: "The questions you are asking have nothing to do with the excellent product and work that Fisher is proposing with regard to protecting America's southern border. The issues and situations in your email were resolved years ago. None of those matters are outstanding today."Fisher, which was founded in North Dakota in 1952, has enjoyed public support from North Dakota Republican Sen. Kevin Cramer -- who as a congressman invited the company's CEO, Tommy Fisher, to Trump's State of the Union address in 2018.