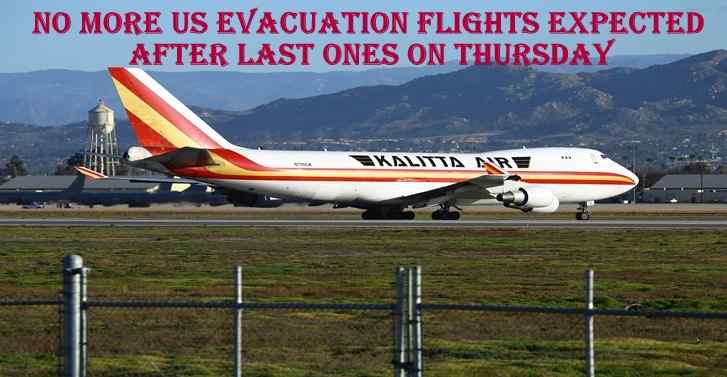 There are one or two more US planes scheduled to evacuate citizens from Wuhan this week, but no more beyond that, a State Department official said today. Two evacuation planes departed Wuhan earlier today, and are currently en route to the United States. On Thursday, there will be "one or more additional flights" to retrieve US citizens in Wuhan, said a statement from the State Department.

"As space is available, seating will be offered to US citizens on a reimbursable basis, to leave from Wuhan Tianhe International Airport to the United States," said the statement.

"At this time, we do not anticipate staging additional flights beyond those planned to depart February 6. As stated in our February 2 Travel Advisory, US citizens currently in China should attempt to depart by commercial means," the statement said.

Health screenings:Â The statement added that travellers onboard the evacuation flights had been screened for symptoms before departure and that once they land they will be subject to further screening and health observation.

A cruise ship is under quarantine in Japan. How can you stay safe onboard?

A cruise ship in Japan is currently under quarantine with 3,700 people on board, after a former passenger was found infected with the coronavirus. Ten more people on board have since tested positive for the illness.

How to stay safe:Â Cruise ships have sometimes been called "floating Petri dishes" because guests stay close together in a contained area for extended periods of time.

If you're worried about your health on board, here are some tips:

Taiwan confirmed its 11th coronavirus case on Tuesday, according to a statement from the self-governing island's Ministry of Health and Welfare. The patient is a man in his 50s, said to be a Taiwanese businessman who returned from Wuhan on Tuesday. He showed no symptoms of fever nor pneumonia and is now in stable condition in an isolated hospital room. Passengers who were on the same flight as the patient are all being tested and will be quarantined for 14 days.

Travel ban:Â Yesterday, Taiwan announced it would deny entry to all foreign nationals who had been to China in the past 14 days. Those with aÂ TaiwanÂ resident certificate will be allowed in, but are required to self-isolate in their homes and monitor their health.Â

The restrictions go into effect this Friday.

Passengers on the Diamond Princess cruise ship, currently docked in Japan's Yokohama Bay, will be quarantined on board for an additional 14 days, a passenger onboard told CNN today. The passenger, Spencer Fehrenbacher, said an announcement from the captain early Wednesday local time confirmed the 14-day quarantine for all passengers.

According to Fehrenbacher, the captainâs announcement explained that "they are waiting for further direction from the Japanese government.â

Fehrenbacher said he was tested for the novel coronavirus late Tuesday. He said he had been taken to a âtesting room,â where he completed a quarantine questionnaire and was administered the coronavirus test.

Coronavirus cruise:Â Earlier today, 10 people on the cruise ship were confirmed to have the Wuhan coronavirus, according to the Japanese health ministry.

The ship docked and was placed under quarantine after a former passenger, who disembarked 12 days ago, was confirmed to have the coronavirus. He is now in stable condition in Hong Kong.

US officials scramble to figure out new rules for coronavirus

After the Trump administrationâs coronavirus travel restrictions came into effect this week, local and state officials say they were left scrambling to figure out the new rules. An East Coast official toldÂ that planes were arriving âwithin hoursâ with no federal protocols in place -- the quarantine locations were still to be determined, and authorities were "scrambling to see who had hospital beds available."

"The federal government basically said, we're going to bring these planes in, and when they land, you guys figure it out," the government official said.Â

The official toldÂ they were left to devise solutions to how to execute the federal order on their own. "These planes were going to land, and we were basically thinking, what the hell are we going to do?" Similar complaints came from a state official on the West Coast.

âItâs a high-level order without a lot of details filled in.Â We are working really hard to understand the conditions,â the West Coast official told.

This official says he worked throughout the weekend to coordinate efforts, and was on the phone with the White House several times.

âItâs been very, very challenging to keep up with everything,â he said.Â âThere are a lot of unknowns."