Defamation In This Present Age 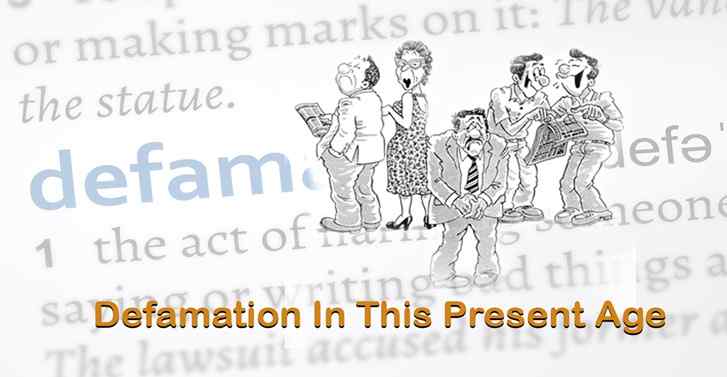 Defaming an individual leads to the damages and losses personally and it affects the reputation and dignity of that person. Once damaged, it cannot be mended nor cannot be the same as before. When a person of repute or a celebrity is being defamed in the present age, damages caused to them is major. This action of destroying reputation through fake or untrue words, speech or news is âdefamationâ.

Hurting or harming the reputation of a person by any false statement amounts to defamation. Though it is not a crime still it belongs to the category of tort. If a person has suffered damages due to defamation then the person, through the legal procedure can recover the damages from the person who made derogatory statements or defamed.

Defamation in written form is libel while defamation through spoken words is slander. It is necessary for a person to not to make fake or false statements about another person. On the other hand, a free society requires different perspectives as well as point of view.

In The Present World

There are defamation laws to protect persons from suffering damages due to defamation and entitled to recover such damages. The person defamed sometimes suffers mentally too due to the false news or statements made about the person and which in turn, makes people doubt the character, dignity, and reputation of that person.

Social media is also another significant source through which defamatory statements are made nowadays. But such persons who make such defamatory statements do not realize at that moment that these statements can shatter the reputation of a person and give it a doubtful view by others. It is difficult to regain that impression and reputation again and even if gained, it is not restored completely in the minds of the people.

To prove if you are being defamed by a particular false statement then it is necessary to show that particular statement has :

Making defamatory statements is not acceptable though giving opinions and your point of view is agreeable in a free society.