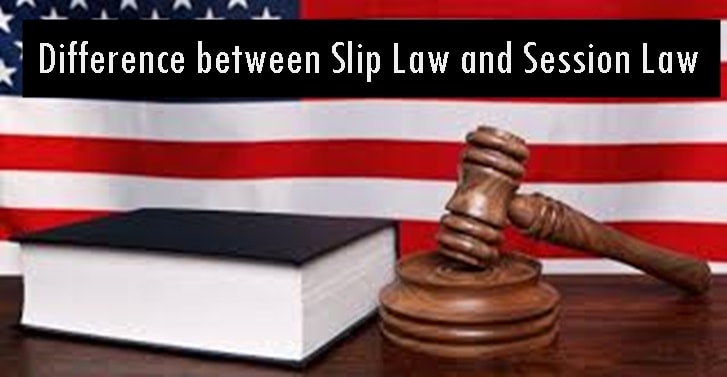 Once a bill becomes a law, it is first published in a form that is called a âslip lawâ by the Office of the Federal Register (OFR) as a part of the Federal Register Publications System.Â  In this form, the law is published by itself in an unbound pamphlet.Â  While this seems like it would be a bare-bones presentation, slip laws can provide a surprising amount of information, including: (1) the bill number; (2) public or private law number; (3) the date of enactment; (4) editorial notes in the margin of the text that âgiv[e] the citations to laws mentioned in the textâ¦[as well as] United States Code classifications, enabling the reader immediately to determine where the statute will appear in the Codeâ; and (5) information about the legislative history of the bill, such as citations to the Congressional Record.

Public laws are collected and reprinted by public law number in the United States Code Congressional and Administrative News (USCCAN).Â  Each month current laws are published in USCCANâs supplemental pamphlets and reissued as bound volumes after the end of each session of Congress.Â  Supplements and bound volumes contain cumulative subject indexes for the session and tables for locating laws by popular name and by affected United States Code section.Â  USCCAN is available in the Law Library Reading Room.

There are several sources for slip laws, including:

A website provided by the Government Publishing Office. Slip laws from 1995-present are available.

Additionally, there may be availability through a library catalog, particularly if the library is a part of the Federal Depository Library Program. To find a federal depository library in your area, visit the Federal Depository Library Directory website, and click the âFDLP for Public Pageâ link. On the next page, choose your state and browse through the list of libraries available near your location.

To Get More Legal Blogs In United States...DOWNLOAD OUR APP

At the end of each session of Congress, the OFR prepares the United States Statutes at Large, which includes all of the public and private laws passed in the session, as well as âconcurrent resolutions, reorganization plans, proposed and ratified amendments to the Constitution, and proclamations by the President.â The Statutes at Large is organized chronologically, based on the enactment date of each law. Each Statutes at Large volume also contains a table of contents and a subject index (sometimes both a subject and individual/personal name index), in order to aid in the location of documents.

All copies of the Statutes at Large are freely available online, on the following websites:

Click on the image to read more about COURT OF FEDERAL CLAIMS FEE SCHEDULE: KNOW MOREâ¦