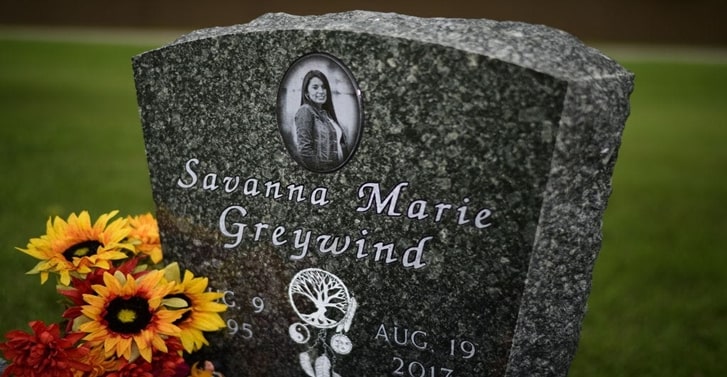 President Donald Trump signed a bill Saturday aimed at addressing missing and murdered Native Americans.Savanna's Act will establish national law enforcement guidelines between the federal government and American Indian tribes to help track, solve and prevent crimes against Native Americans. The law isÂ named afterÂ Savanna LaFontaine-Greywind,Â a pregnant 22-year-old Spirit Lake tribal member from North Dakota who was killed in 2017.The bipartisanÂ bill passed the HouseÂ last month afterÂ unanimously passingÂ the U.S. Senate in March. AlaskaÂ Sen. Lisa MurkowskiÂ reintroduced the bill after former North Dakota Sen. Heidi Heitkamp proposed it in 2017."For far too long, the crisis of missing and murdered Native American women went unknown outside Indian Country," Heitkamp told USA TODAY in a statement on Sunday. "When I first introduced Savanna's Act in 2017, I wrote this bill to take a critical first step to help address this crisis and help raise awareness about it by bringing these women out of the shadows and making them not invisible."She added, "Finally, this bill was signed into law. And it happened just before Indigenous Peoples' Day âÂ a reminder that the U.S. government has so much more to do to repair the broken promises to Native communities."

TrumpÂ tweeted Saturday: "I was proud to sign Savannaâs Act & the Not Invisible Act. We have also provided $295 Million to support public safety & crime victims. Forgotten NO MORE!"The bill requires federal, state, tribal and local law enforcement agenciesÂ to update and create protocolsÂ to address missing or murdered Native Americans. The U.S. Department of Justice mustÂ provide training to law enforcement agencies on data entry, educate the public on the database, help tribes and Indigenous communities enter information in the database, develop guidelines for response to missing or murdered Indigenous people, provide technical assistance to tribes and law enforcement agencies and report data on missing or murdered Native Americans.Murder is the third-leading cause of death for American Indian/Alaska Native women,Â according toÂ the Urban Indian Health Institute. In 2016,Â there were 5,712Â cases reported of missing and murdered Indigenous women and girls,Â theÂ UIHI's reports. But only 116 cases were logged in the DOJ database.In 2018, Brooke Crews of North DakotaÂ was sentenced to life in prisonÂ for killing Greywind and cutting her baby from her womb. The baby survived.