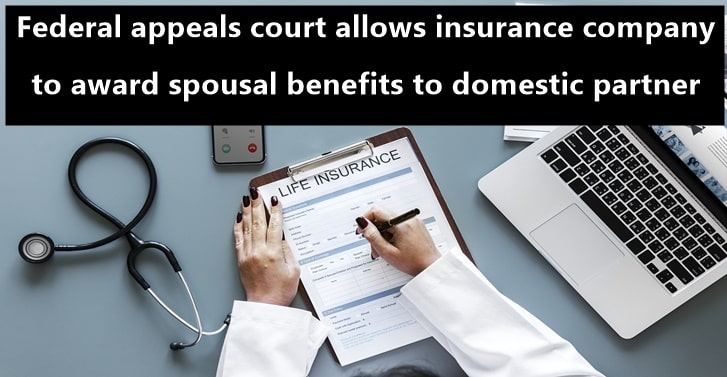 The US Court of Appeals for the Eighth Circuit held Tuesday that a life insurance benefit administrator may choose to define “spouse” in a way that encompasses “domestic partner.”

The decedent, Terry Engle, had life insurance and accidental death insurance from Unum Life Insurance Company of America, via his employer, Land O’Lakes, Inc. Engle did not designate beneficiaries, but he was survived by two minor children and his domestic partner, Jaclyn Jones. Because Engle had not designated beneficiaries, the policy called for Unum to make payments to Engle’s estate or to surviving family members: spouse, children, parents, in that order.

Unum contacted Engle’s mother, Sharon, who stated that Engle did not have an estate, an estate would not be created, and that Engle was in a domestic partnership with Jones. Unum then asked Jones to sign an affidavit attesting to the fact that she was Engle’s domestic partner. Jones signed and delivered the affidavit to Unum, which then paid her $266,000.

Engle’s mother, Sharon, then filed suit complaining that Unum paid Jones, who was not Engle’s “spouse,” rather than Engle’s children. The district court sided with Engle’s mother. Upon appeal, the Eighth Circuit reversed.

The court further reasoned that its deference to Unum’s interpretation was warranted because Unum had not kept the payout for itself. Therefore, the Eighth Circuit reversed the district court’s judgment.