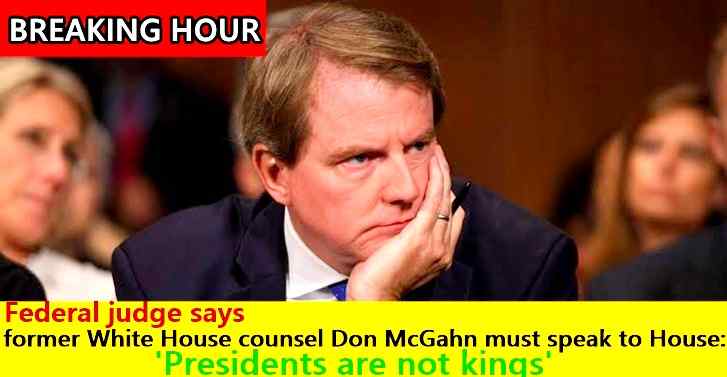 "However busy or essential a presidential aide might be, and whatever their proximity to sensitive domestic and national-security projects, the President does not have the power to excuse him or her from taking an action that the law requires," Judge Ketanji Brown Jackson wrote."Stated simply, the primary takeaway from the past 250 years of recorded American history is that Presidents are not kings," Jackson said.

The ruling is a blow to Trump and White House efforts to block parts of the impeachment inquiry. It could encourage resistant witnesses from the administration to testify and could bolster any case House Democrats make to impeach the President for obstructing its proceedings or obstructing justice.The Justice Department has filed paperwork to appeal the judge's opinion, and McGahn's testimony may be put on hold during the appeals. The department also asked Jackson to pause her ruling pending appeal.House Intelligence Chairman Adam Schiff said in a statement that it will be up to the witnesses who have defied the committee's demands to change course if they want to testify."The witnesses who have defied Congress at the behest of the President will have to decide whether their duty is to the country, or to a President who believes that he is above the law," the California Democrat said.

Jackson's opinion Monday is some of the strongest wording yet criticizing the White House's approach to investigations into Trump. It represents a flex of muscle from the judicial branch, which has largely been used for delays as the House and White House clash over the probe.The ruling blasts the Trump White House and Justice Department in the judge's own words, but her reasoning largely rests upon decisions made by previous judges, including a district judge who said George W. Bush White House officials had to testify to Congress.Still, appeals could take weeks if not months to resolve, if the matter ultimately heads to the Supreme Court. Federal appeals courts and the Supreme Court haven't yet firmly resolved questions about executive branch witness testimony before Congress.The Justice Department plans to appeal the ruling in the McGahn case, a department spokeswoman said Monday.

In this case, McGahn is represented by the Justice Department.

The House Judiciary Committee has been trying to force McGahn to testify since April about the President's attempts to obstruct the investigation into Russian meddling in the 2016 US presidential election. The committee says it still has an urgent need to hear from the key witnesses from special counsel Robert Mueller's investigation.Jackson criticized the Justice Department's broad claims of immunity.

"To make the point as plain as possible ... with respect to senior-level presidential aides, absolute immunity from compelled congressional process simply does not exist," Jackson wrote.

"Indeed," she added, "absolute testimonial immunity for senior-level White House aides appears to be a fiction that has been fastidiously maintained over time through the force of sheer repetition in (Office of Legal Counsel) opinions, and through accommodations that have permitted its proponents to avoid having the proposition tested in the crucible of litigation."

Jackson also attacked the White House's assertion that it could block its former officials -- not just current employees -- from testifying. Though the administration has tried to use immunity as a "trump card," she wrote, it "should, at most, be a raincheck, and not the lifetime pass that DOJ proposes."

The ruling stops short of saying White House officials must answer all questions they're asked before Congress. Instead, the ruling focuses on whether an official like McGahn must appear for testimony once subpoenaed.

"If a duly authorized committee of Congress issues a valid legislative subpoena to a current or former senior-level presidential aide, the law requires the aide to appear as directed, and assert executive privilege as appropriate," the judge wrote in the 120-page opinion Monday.If McGahn were to appear for testimony, he still may be able to refuse to answer questions, citing executive privilege. Jackson referred to a case involving Bush's White House counsel Harriet Miers.

"Accordingly, just as with Harriet Miers before him, Donald McGahn 'must appear before the Committee to provide testimony, and invoke executive privilege where appropriate,' " Jackson wrote.

The judge, in this ruling, makes clear that the House should have subpoena power over other top administration officials, even outside of McGahn's situation. Other top officials, such as former deputy national security adviser Charles Kupperman, have separately gone to court for guidance on whether they are immune from testimony or must comply with impeachment-related subpoenas. Kupperman continues to fight his case, and is not bound by this decision.Still, Jackson notes in her opinion Monday that even the President himself may not be immune from testimony.

"Even with respect to the underlying contention that the President himself is entitled to absolute testimonial immunity, Miers found binding Supreme Court cases that compelled the opposite conclusion," Jackson wrote."A President's confidentiality interests may sometimes be overridden over his objection," she added in a footnote. "It seems unlikely that a President would be declared absolutely immune from compelled congressional process."