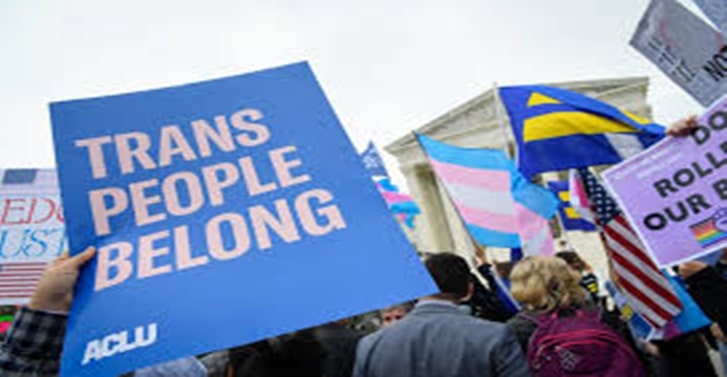 WASHINGTON â When the Supreme Court ruled in June that a law barring sex discrimination in employment applies to gay, lesbian and transgender workers, dissenting Associate Justice Samuel Alito warned it was "certain to have far-reaching consequences."Transgender boys using boys' bathrooms. Transgender girls competing in women's athletics. Transgender workers insisting that health insurance policies cover transition-related care. "We will not be able to avoid those issues for long," Alito said. "The entire federal judiciary will be mired for years in disputes about the reach of the courtâs reasoning."It didn't take long for some of Alito's predictions to become reality. In recent weeks, federal judges from New York to Florida to Idaho have cited the Supreme Court's ruling to justify expanding transgender rights beyond the workplace.The most recent example came last week, when the U.S. Court of Appeals for the 4th Circuit, based in Virginia, said the Constitution and federal law allow a transgender high school student to use the restroom of his choice. It was a victory for Gavin Grimm, who has since graduated and gone to college."After the Supreme Courtâs recent decision ... we have little difficulty holding that a bathroom policy precluding Grimm from using the boys restrooms discriminated against him 'on the basis of sex,'" the court said in a 2-1 decision.That followed just weeks after federal courts ruled for transgender rights in three other cases dealing with bathrooms, school sports and health care. All three decisions cited the Supreme Court's landmark 6-3 ruling in Bostock v. Clayton County, Georgia, which extended protection against job discrimination to gay, lesbian and transgender workers.The string of victories has emboldened the LGBTQ rights movement, which has hopes of extending its winning streak to other areas.âWeâre using Bostock everywhere, just about, in all these other contexts â education, health care, housing," said James Esseks, who focuses onLGBTQ rightsat the American Civil Liberties Union.But winning in federal trial and appeals courts doesn't mean the Supreme Court will agree. The justices limited their decision in June to employment discrimination and reserved other issues for another day.Perhaps the most difficult legal battle remaining for gay rights concerns exemptions for religious and moral objectors, which the Supreme Court has supported in the past. Its ruling in June expressed deep concern "with preserving the promise of the free exercise of religion enshrined in our Constitution."The U.S. Court of Appeals for the 2nd Circuit referenced that line in July when it allowed a Christian adoption agency to challenge as unconstitutional New York's order that it serve same-sex and unmarried couples.âWe need to listen to the Supreme Court when it acknowledges the importance of religious freedom,â said Matt Sharp, senior counsel at Alliance Defending Freedom, which represented the adoption agency. "It wants to show tolerance for religious beliefs.âThe justices will hear a major case in November in which a Catholic social services agency seeks to participate in Philadelphia's foster care program while refusing to serve same-sex couples. The case has attracted more than 80 friend-of-the-court briefs from both sides.Supreme Court's split decision for abortion rights gives opponents an unlikely boostSupreme Court, federal judiciary rising as key issue in presidential, Senate electionsTrump asks Supreme Court to let him block critics from following him on TwitterJustice Elena Kagan, after decade on bench, emerges as Supreme Court 'bridge-builder'

The Supreme Court's decision in June handed victories to gay men in Georgia and New York and a transgender woman in Michigan who claimed their firings constituted sex discrimination."An employer who fires an individual for being homosexual or transgender fires that person for traits or actions it would not have questioned in members of a different sex," Associate Justice Neil Gorsuch wrote. He was joined by Chief Justice John Roberts and the court's four liberal justices.The customarily conservative Gorsuch limited his opinion to Title VII of the Civil Rights Act of 1964, which bars employment discrimination based on race, color, national origin, sex and religion."We do not purport to address bathrooms, locker rooms, or anything else of the kind," he said. "Whether other policies and practices might or might not qualify as unlawful discrimination or find justifications under other provisions of Title VII are questions for future cases, not these."But Alito called the court "irresponsible" for refusing to consider the consequences of its standard in the employment discrimination cases. His 107-page dissent listed 167 federal statutes that could be affected, from elementary school education to death sentences. "Over 100 federal statutes prohibit discrimination because of sex," he said. "The briefs in these cases have called to our attention the potential effects that the courtâs reasoning may have under some of these laws, but the court waves those considerations aside."Among the earliest casualties was the Trump administration's new rule narrowing the legal definition of sex discrimination in health care to omit transgender patients. The rule threatens protections granted under the Affordable Care Act.In his Aug. 17 opinion temporarily blocking the rule, federal District Judge Frederic Block of the Eastern District of New York cited the Supreme Court's Bostock decision immediately and repeatedly. "When the Supreme Court announces a major decision, it seems a sensible thing to pause and reflect on the decisionâs impact," Block wrote. "Since (the administration) has been unwilling to take that path voluntarily, the court now imposes it."The same day, federal District Judge David Nye of Idaho struck down that state's first-in-the-nation law prohibiting transgender girls from playing on women's athletics teams. He cited the Bostock decision as reason to discount an Education Department warning that Lindsay Hecox's participation in sports at Boise State University would violate federal law. âThe proponentsâ argument that Lindsay and other transgender women are not excluded from school sports because they can simply play on the menâs team is analogous to claiming homosexual individuals are not prevented from marrying under statutes preventing same-sex marriage because lesbians and gays could marry someone of a different sex," Nye wrote.But the Education Department doubled down on its view in a letter Monday, contending that "the Bostock holding does not alter the legal authority for sex-segregated teams under Title IX.""The courtâs opinion in Bostock also does not affect the departmentâs position that its regulations authorize single-sex teams based only on biological sex at birth â male or female â as opposed to a personâs gender identity," wrote Kimberly Richey, acting assistant secretary for civil rights.

More than sports teams or health care, however, the subject of bathrooms dominated much of the Supreme Court's oral argument last October. The "big issue right now raging the country is bathroom usage â same-sex bathroom usage," Associate Justice Sonia Sotomayor said.The Obama administration had sought to resolve that issue in 2016 when it advised school districts nationwide to let students use facilities corresponding to their gender identity. But the Trump administration rescinded that guidance in 2017.Following the Supreme Court's latest decision, lower courts have cited it in ruling that transgender students can choose a bathroom based on their gender identity, rather than their assigned sex at birth.In early August, the U.S. Court of Appeals for the 11th Circuit ruled that Drew Adams, a high school student in Florida, can use the boys' bathroom. In his case and Grimm's, courts have said what constitutes job discrimination also applies in education. "Bostock confirmed that workplace discrimination against transgender people is contrary to law. Neither should this discrimination be tolerated in schools," the 11th Circuit panel said in a 2-1 ruling. "The school boardâs bathroom policy, as applied to Mr. Adams, singled him out for different treatment because of his transgender status. It caused him psychological and dignitary harm."Dissenting circuit court Judge William Pryor argued that the Supreme Court did not reach any conclusion on bathrooms and locker rooms, which he said should remain separated based assigned sex at birth."After all, context matters," Pryor wrote. "As the late Justice Thurgood Marshall once put it, 'A sign that says 'men only' looks very different on a bathroom door than a courthouse door.'"

But the ACLU's Esseks noted that federal district and appeals courts have recognized sex discrimination against transgender people for the past 20 years, with few exceptions.âBostockÂ did not bring about a revolution," Esseks said. "What would have been a revolution is if Bostock had come out the other way. It would have taken away the protectionsÂ that LGBTQ people, and particularly transgenderÂ people, had been relying on for decades.â