Here's one big difference between the Trump and Nixon impeachment proceedings 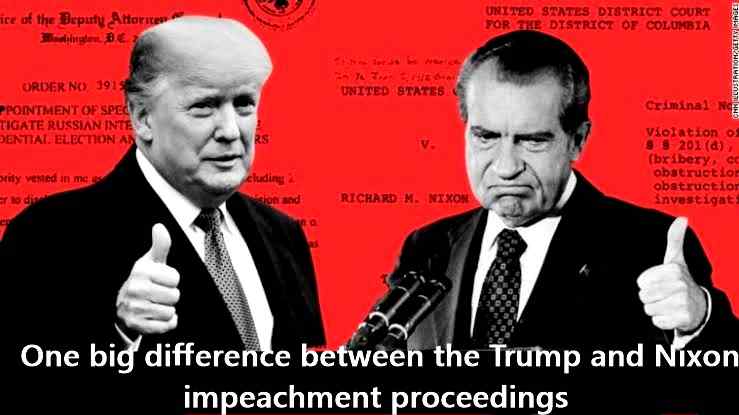 The American people are nearly two months into the impeachment inquiry into President Donald Trump and they're still mostly split on whether he should be impeached and removed from office, with exactly half of Americans saying he should be, according toÂ CNN's latest poll. Democrats are hoping the impeachment hearings that happened before Thanksgiving, some of them featuring blockbuster testimony, will help push public opinion toward impeaching Trump and removing him from office -- as similar hearings did in the summer of 1974 when House Democrats moved toward impeaching then-President Richard Nixon.

So far, that's not been the case. AÂ CNN pollÂ released Tuesday showed the public hearings have so far had no impact on public opinion, with no change in the percentage of people who say Trump should be impeached and removed from office since October.There's a reason for that -- and it speaks to a big difference between those 1974 hearings and the ones held in 2019. And that difference has nothing to do with what happened on Capitol Hill or that the Senate is unlikely to convict Trump, should he be impeached by the House. Instead, it has everything to do with the public itself: Americans no longer trust their government.Pew reported in March 2019,Â months before the Ukraine scandal came into the public sphere, that just 17% of Americans trusted the federal government.Â A separate Pew poll shows three-quarters of AmericansÂ think trust in the federal government is shrinking and almost two-thirds of Americans find it hard or somewhat hard to tell when elected officials are telling the truth and when they're lying.

The polling shows American trust in the federal government has withered precipitously since Nixon's impeachment proceedings in 1974 and, by and large, those in Congress and the executive branch are viewed as untrustworthy liars who are rarely acting ethically,Â according to polling from the Pew Research Group.Importantly, this is not inherently a statement about Trump. American trust in the executive branch has been in the high 30s to high 40s since roughly 2006 during President George W. Bush's administration. The polling suggests Trump's administration hasn't really had a major effect on the public's view of the executive branch; they haven't trusted the President or his branch of the government for years across administrations from both parties.

In the early 1970s, Americans mostly trusted their government. The release of the Pentagon Papers in 1971 -- which revealed how much the federal government had misrepresented the war in Vietnam -- began to shake that trust but even so an average of 53% of Americans trusted the federal government all or most of the time in October 1972, before the Watergate scandal, according to Pew Research Center.The fact that more than half of Americans trusted the government in Washington meant the revelations in the impeachment hearings in 1974 shocked the country. As the hearings unraveled more details of Nixon's role in the 1972 break-in and his attempts at covering up that role, the polling shifted dramatically in favor of impeaching and removing him from office. He eventually resigned before the full House took action on impeachment.The ensuing decades brought historic incidents and broken promises related to war, the economy, elections and more that undermined American faith in the federal government and our democratic institutions.

On top of all of that add the rise of talk radio, cable news and social media (and the subsequent spike in access to misinformation and conspiracy theories), along with the collapse of local journalism and declining trust in the mainstream media. The result is an American public that is no longer shocked by its government and institutions behaving badly but instead expecting it.Given all of this, all the polling data suggests Americans will be far less shocked at hearing the details of the campaign by Trump and his associates to pressure Ukraine into announcing investigations into the 2016 election and former Vice President Joe Biden and his son, Hunter.Polling also shows that Americans have lost trust in the branch of government investigating Trump.In April 1974, just before the beginning of public hearings in that impeachment inquiry, 71% of Americans trusted Congress a great deal or a fair amount, per Gallup. Just 38% of Americans felt the same way in September in a Gallup poll taken less than two weeks before House Speaker Nancy Pelosi announced the impeachment inquiry into Trump.

Suffice to say that the public's opinion of Congress is not great overall. Fewer than half of Americans think members of Congress care about their constituents or provide fair and accurate information to the public, according to Pew. Pew also reports that more than four in five people say members of Congress act unethically all, most or some of the time.That's not great. And it points to a hard truth: House Democrats are going to have a tough time making their case to people they haven't already convinced because most people generally think their lawmakers in Washington are lying to them.Let's not get it twisted though: the public's trust in the executive branch has also generally fallen to pieces since the Nixon administration.In May 1972, pre-Watergate, 73% of Americans said they trusted the executive branch a great deal or a very fair amount,Â according to Gallup.Â By September, less than half of Americans said the same -- 45%.

The United States of the early 1970s was one recovering from the tumultuous end to the 1960s when political assassinations, race riots and mass protests against the Vietnam War nearly tore the country apart and anti-government groups were setting off bombs. But even then, polling showed the public still had more faith and trust in its government institutions than it does right now,Â Pew's research shows. In the end, the hardest part of the impeachment inquiry for Democrats may not be proving Trump committed an impeachable offense. It may be convincing a jaded American public that it matters.