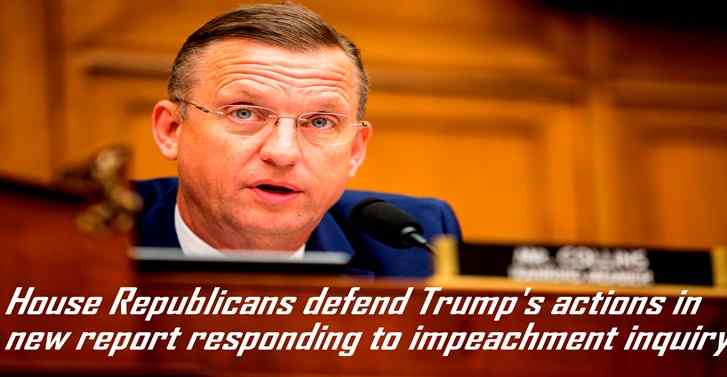 Republicans have given a full-throated defense of President DonaldÂ Trump's dealings with UkraineÂ in a report published Monday that rejects the Democratic allegations that the President abused his office or committed any other impeachable offense.

House Republicans prepared the 123-page report defending the President ahead of the release of a Democratic committee report that's expected to lay out charges likely to form the basis forÂ potential articles of impeachmentÂ and will be released on Tuesday.

"The evidence presented does not prove any of these Democrat allegations and none of the Democrats' witnesses testified to having evidence of bribery, extortion, or any high crime or misdemeanor," according to a copy of the report reviewed by CNN. The Republican report does not acknowledge any wrongdoing surrounding the central allegations in the impeachment inquiry, putting forward a narrative that's likely to be used by congressional Republicans and the White House in their fight against the Democratic impeachment push. The report largely ignores or downplays testimony from career officials who raised serious questions and concerns about the conduct of the President and some of his top aides.

The Republicans argue that Trump's concerns about former Vice President Joe Biden and his son Hunter were valid, that Trump withheld a meeting and US security aid as he sought proof that Ukrainian President Volodymyr Zelensky was a "true reformer," and there was no quid pro quo as Trump did not pressure Zelensky on the July call between the two Presidents, despite Trump asking for a favor.

The Democratic report, which will be voted on Tuesday, is all but sure to have a conclusion 180-degrees apart from their Republican counterparts.

The Republican report was compiled by the staff of the House Intelligence, Oversight and Foreign Affairs committees, which took partÂ in the 17 depositions of witnessesÂ during the impeachment inquiry. The Democratic report was made available Monday evening for House Intelligence members to review ahead of a Tuesday committee vote to approve it and send it to the Judiciary Committee.House Intelligence Chairman Adam Schiff, a California Democrat, slammed the Republican report, accusing them of writing it for an "audience of one." Schiff said the GOP report "ignores voluminous evidence that the president used the power of his office to pressure Ukraine into investigating his political rival by withholding military aid and a White House meeting the President of Ukraine desperately sought."

"Tellingly, the Minority dismisses this as just part of the President's 'outside the beltway' thinking," Schiff said. "It is more accurately, outside the law and constitution, and a violation of his oath of office."

Republicans argue that Trump's skepticism toward Ukraine is legitimate given Kyiv's "history of pervasive corruption."The report emphasizes what it calls important context for understanding Trump's actions in temporarily pausing the aide to Ukraine: the President does not just have a skepticism of Ukraine, but that he is skeptical of all foreign assistance. Going back to his first speech as a candidate for President in June 2015, Trump expressed this skepticism. But the Republicans' analysis avoids contending with what witnesses testified was different about the specific holdup of security aid to Ukraine: no one was ever clear about the reasoning for the hold. US diplomatÂ Bill TaylorÂ testified that there was "no good policy reason, no good substantive reason, no good national security reason" to holding up the assistance. US Ambassador to the European UnionÂ Gordon Sondland testifiedÂ that he did not know why the aid was held up and struggled to get an answer.

Trump also failed to mention corruptionÂ in the call with Zelensky on July 25Â or in his initial April call with Zelensky, according to the White House rough transcripts.The Republican report gives the best possible reading into Trump's call with Zelensky, claiming he wasn't pressuring Zelensky or even asking for an investigation into the Bidens. The call summary, Republicans write, "shows that President Trump referenced the Bidens only in passing and that the presidents did not discuss the topic substantively."

"The summary of their July 25, 2019, telephone conversation shows no quid pro quo or indication of conditionality, threats, or pressure â much less evidence of bribery or extortion," they write.