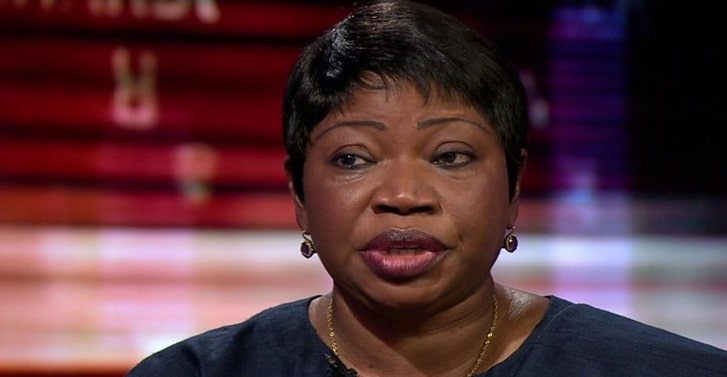 The US has imposed sanctions on senior officials in the International Criminal Court (ICC), including chief prosecutor Fatou Bensouda.The Hague-based ICC is currently investigating whether US forces committed war crimes in Afghanistan.The US has criticised the court since its foundation and is one of a dozen states which have not signed up.Balkees Jarrah, senior counsel at the non-governmental organisation Human Rights Watch, condemned the sanctions as a "shameful new low for US commitments to justice for victims of the worst crimes".Mr Pompeo's move marked a "stunning perversion of US sanctions, devised to penalize rights abusers and kleptocrats, to target those prosecuting war crimes", she tweeted.Created by a UN treaty in 2002, the ICC investigates and brings to justice those responsible for genocide, crimes against humanity and war crimes, intervening when national authorities cannot or will not prosecute.

The treaty has been ratified by 123 countries, including the UK. But the US - along with China, India and Russia - has refused to join, whileÂ some African nations have accused the body of being unfairly focused on Africans.

What are the sanctions?

President Donald Trump issued an executive order in June, which allows the US to block the assets of ICC employees and stop them entering the country.Addressing reporters on Wednesday, Mr Pompeo said Ms Bensouda and Phakiso Mochochoko, the head of the Jurisdiction, Complementarity and Cooperation Division, were to be sanctioned under this order.Dismissing the ICC as a "thoroughly broken and corrupted institution", he said those who continued to "materially support those individuals risk exposure to sanctions as well".The US state department has also restricted the issuance of visas for ICC staff involved in "efforts to investigate US personnel".Media caption'ICC will not be deterred by US coercion'When President Trump issued his executive order in June, the ICC denounced what it called "further threats and coercive actions" against it."An attack on the ICC also represents an attack against the interests of victims of atrocity crimes, for many of whom the Court represents the last hope for justice,"Â its statement read.

Who is Fatou Bensouda?

As a former justice minister in The Gambia, her home country, Ms Bensouda was ideally placed to succeed Luis Moreno-Ocampo as ICC chief prosecutor, as she had been his deputy throughout his term.She had also previously been a senior legal adviser at a UN-backed tribunal which prosecuted the alleged ringleaders in the 1994 Rwandan genocide.While she broadened ICC investigations to look at conflicts elsewhere, which has now earned her the wrath of the US, Africa remained her major focus. All ICC trials have so far focused only on Africans - and a militia leader from the Democratic Republic of Congo, Thomas Lubanga, became the first person to be sentenced for war crimes by the ICC in 2012.But Ms Bensouda also faced a string of defeats, including the acquittal of Ivory Coast's ex-President Laurent Gbagbo on war crimes charges in 2019 and the dropping of crimes against humanity charges against Kenya's President Uhuru Kenyatta in 2014.

What is the ICC investigating?

The ICC began investigating alleged war crimes committed by the US and others in the Afghan conflict earlier this year.According toÂ the ICC's legal process, the court can issue arrest warrants or a summons to appear once prosecutors have gathered sufficient evidence and identified suspects. From there, they will decided if there is enough evidence for a case to go to trial.At the time, Mr Pompeo vowed to protect Americans from the probe, calling it "a truly breathtaking action by an unaccountable, political institution masquerading as a legal body".

A 2016 report from the ICC said there was a reasonable basis to believe the US military had committed tortureÂ at secret detention sites operated by the CIA.

The actions of the Taliban, the Afghan government and US troops since May 2003 are expected to be examined by the court.Afghanistan is a member of the court but officials there have also expressed opposition to the inquiry.