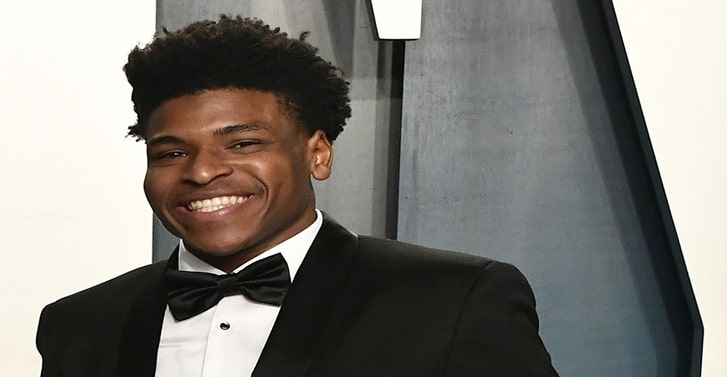 he FBI is investigating allegations that celebrity cheerleader Jerry Harris solicited sexually explicit photos and sex from minors, multiple sources told USA TODAY.Â Agents executed a search warrant Monday afternoon at a home in Naperville, Illinois, as part of that investigation.âThe FBI is conducting court-authorized law enforcement activity in the area,â Siobhan Johnson, FBI special agent and public affairs officer, told USA TODAY. She declined further comment.Harris, who gained national prominence when he was featured in Netflixâs recent âCheerâ docuseries, has not been criminally charged. Harris, 21, did not respond to a request for comment.The criminal investigation is based on allegations brought by 14-year-old twin brothers. In interviews with USA TODAY, the boys described a pattern of harassment, both online and at cheer competitions, that started when they were 13 and Harris was 19. They said it continued for more than a year.FBI executes a search warrant at a home in Naperville, Illinois. on Sept. 14, 2020. The search is part of an investigation into allegations that Netflix "Cheer" star Jerry Harris solicited nude photos and sex from minors.SANDY HOOPER, USA TODAYThose allegations were also reported to police by Varsity Brands, a private company that dominates the cheerleading industry, handling everything from uniform sales to major competitions. Harris is accused of asking one of the brothers to have sex with him in 2019 at two Varsity cheerleading competitions.In Aug. 1Â letters to policeÂ in Florida and Texas, Varsityâs Chief Legal Officer Burton Brillhart said the company had learned ofÂ âinappropriate sexual conductâ allegations against Harris and was reporting the information to authorities as required by law.The FBI is investigating reports made to police in Texas and Florida by two 14-year-old boys who claim Netflix "Cheer" star Jerry Harris solicited sexually explicit photos and sex.

âAs a result of the recent allegation, we have barred this person from having any affiliation with Varsity Brands or any of its subsidiaries or affiliates, now and in the future,â he wrote.He described Harris as a former employee who was not actively working for Varsity at the time of the incidents. In May 2019, Harris posted on social media that he was working for the National Cheerleaders Association, a Varsity brand. That summer, he posted multiple photos and videos of himself coaching athletes at NCA camps.Varsity spokeswoman Jackie Kennedy said Monday the organization "canât comment on an active law enforcement investigation; we continue to cooperate with authorities in their inquiries on this matter."Show captionTwins Charlie, left, and Sam at their home in Texas. The brothers allege that celebrity cheerleader, Jerry Harris, solicited them for sex and sexually explicit...

The brothers, Charlie and Sam, and their mother Kristen spoke with USA TODAY in August at their Texas home.Â USA TODAY agreed to withhold their last name because the boys are minors and alleging abuse.The family provided USA TODAY with screenshots from five text and social media conversations between the boys and accounts they say belong to Harris. Several include messages explicitly requesting nude photos or sex.Â In one conversation on Snapchat, an account with the name â.jerry harrisâ responded to a photo of Charlie stretching his leg above his head.The message reads, 'Do it naked and take a video and show me.' Part of this image was blurred by USA TODAY to protect the identity of a minor.PROVIDED BY FAMILYâDo it naked and take a video and show me,â Harris replied privately, according to a screenshot provided to USA TODAY.Charlie said his interactions with Harris left him struggling with anxiety. He lost sleep, his grades suffered and he cried at school.âIt was just eating me alive,â he said. âIt was just making me so gross and uncomfortable. Every time I saw his name or something like that, I was just cringing about it.âIt was just eating me alive. It was just making meso gross and uncomfortable. Every time I saw his name or something like that, I was just cringing about it.Kristen said the FBI interviewed both boys on Aug. 28 and Charlie again on Sept. 11. She said the agency has pulled data from their cellphones and requested documentation from competitions where they interacted with Harris.Nine law enforcement agents spent about three hours Monday afternoon in Harris' home in Naperville, Illinois. From the outside, there was little to be seen of the FBI's effort. The home, tucked at the end of a quiet cul de sac, has an immaculate lawn with a row of small bushes lining the walkway. Two officials briefly stepped out to pull two duffelÂ bags from a four-door red Jeep Wrangler Rubicon parked in front of the home.Around 5:15 p.m. central time, nine agents walked out the front door and left in unmarked cars. Soon after, a woman who identified herself as a family friend arrived atÂ the home. It appeared to be Harris who opened the door to let her in.TheÂ allegations against Harris have been reported to at least four other law enforcement agencies in Texas and Florida, records obtained by USA TODAY show.Show captionKristen, mother to twin boys Charlie and Sam, at her home in Texas. Her sons allege that celebrity cheerleader, Jerry Harris, solicited them for sex...

The accusations against Harris have also been reported to the U.S. All Star Federation, which governs the competitive cheerleading discipline in which Harris and the boys compete. Kristen said she filed two reports with USASF. She said her first report â sent May 15 â garnered only a brief response from USASF Vice President of Membership Amy Clark. She said she did not hear from Clark again until she filed a second report on July 9. Clark set up a call with Kristen for the next day.During that call, Clark indicated the organization was opening an investigation, according to an audio recording Kristen provided USA TODAY. However, USASF did not suspend Harris from participation in All Star activities until Monday, the same day USA TODAY reported the allegations against Harris. USASF said it could not comment on an ongoing investigation.