Kenosha visit reality: Trump is anything but a 'law and order' leader 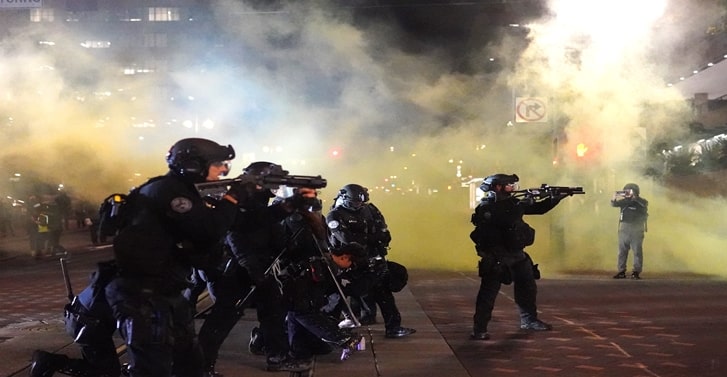 In heading to Kenosha, Wis. to address unrest there, Donald Trump has claimed the mantle of âlaw and orderâ for his presidency. In fact, he has shown only disdain for both. He has failed to keep people safe âÂ the central reason we care about law and order and the most basic and important duty of a president. As former federal prosecutors and law enforcement officials with 100 years of collective experience, we offer some thoughts about what it means to truly lead on public safety issues.Â

Trump is not pro-law enforcement

First, Trump is not âpro-law enforcement.âÂ He has spent much of the past three and a halfÂ years smearing law enforcement when he dislikes the subject of their investigations or their conclusions.Â Trump repeatedly called a legitimate investigation into Russiaâs attacks on our election a ârigged witch hunt;â compared FBI agents to âstormtroopersâÂ when carrying out a court-authorizedÂ search warrant; mischaracterized FBI work with loaded words like âinfiltratingâ or âspyingâ; and suggested that âflippingâ cooperators (a practice upon which many significant criminal cases are built) should be illegal.Â He heralded the intelligence communityÂ when it successfully targeted terrorists overseas, but vilified the intelligence communityÂ when it concluded Russia interfered with the 2016 election. Support of law enforcement is not supposed to be transactional, but that is Donald Trumpâs worldview.Even when professing to support law enforcement, Trump and his Attorney General William Barr have done so in ways that are designed to inflame tensions between law enforcement and the people they serve. TrumpÂ encouraged police not to be âtoo niceâÂ in handling suspects. BarrÂ threatenedÂ communities that donât show law enforcement âmore respectâ with the loss of police protective services.Â Actions by law enforcement should be scrutinized critically to be sure, and officers held accountable when they violate their duty of trust. But the unfair and categorical attacks by the president can and will impede the progress of everyday cases that we need to protect public safety from murderers, sexual predators, human traffickersÂ and terrorists. In other words, the antithesis of law and order.

Second, the rule of law means that we should strive for the ideal that race, national origin, sex, wealth, political partyÂ and allegiance to the those in power should make no difference as to who is investigated or prosecuted or how a person is treated by law enforcement. But in the Trump administration, this ideal has been violated repeatedly.Â Trump associatesÂ Roger StoneÂ andÂ Michael FlynnÂ received special treatment that others charged with similar crimes have not. Although convicted by a jury, beyond a reasonable doubt, Stone will never serve a day of hisÂ 40-month sentenceÂ for witness tampering, obstruction of justiceÂ and perjury âÂ crimes that a sentencing judge found he committed to cover up for the president. Thatâs because Trump commuted his sentence before it began. Similarly, Michael Flynn, afterÂ admitting his guilt under oath twice, saw the Department of JusticeÂ move to dismiss his case, using a legal theory that the administration has rejected when asserted by defendants who are not allied with Trump.Â

Trump needs to actually comply with the law

Third, if a president truly supports âlaw and order,â then he must comply with the law himself. He must lead by example. Again, Trumpâs record suggests an unparalleled disregard for the law.Â We believe he hasÂ obstructed investigators, condoned repeatedÂ violations of the Hatch Act, retaliated against witnesses likeÂ Alexander VindmanÂ andÂ Michael Cohen, pardoned allies, and refused to comply withÂ subpoenasÂ from state prosecutors and regulators,Â filing frivolous motions in courtÂ to run out the clock on valid criminal grand jury subpoenas. TheÂ Supreme Court has rejectedÂ his view that he is not subject to the laws that citizens comply with every day.Â The most damaging proof Trump is not a âlaw and orderâ president is the way he fans the flames of division and hatred which provokes unrest and makes us all less safe. In a call with our nationâs governors following the killing of George Floyd, Trump instructed them to âdominate the streets,â hardly a recipe for de-escalating tensions and restoring order. His Department of Homeland Security used agentsÂ in military garb in Portland, who responded to protesters withÂ rubber bullets and teargas. These tactics exacerbated tensions, attracting more protesters, such asÂ the âwall of Moms,â ultimately requiring federal withdrawal.Â In the wake of other police killings, the president has offered no solutions to deal with the issue of racial injustice. Indeed, by blurring together those who peacefully protest and those who engage in violent and criminal activity, he undermines efforts to deal with the problem of unequal application of the law to people of color. This approach stands in stark contrast to his handling of protests in Charlottesville, when he praised white supremacists by suggesting that there were âvery fine people on both sides.â Most recently, he hasÂ defended Kyle Rittenhouse, the 17-year-old charged with killing two people in Kenosha, Wis., in the wake of the police shooting of Jacob Blake. Vigilantism is the opposite of law and order.Â A president should speak against injustice, respect and obey the law, urge unity and seek to heal divisions rather than widen them for his own political gain.Â A president who was truly the law and order president Trump has proclaimed himself to be would be doing precisely that.Â