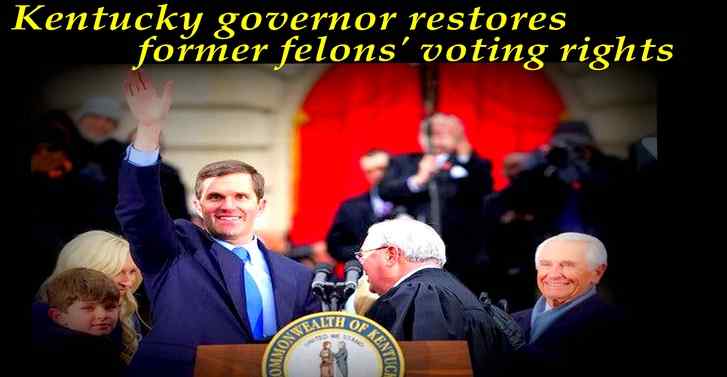 "My faith teaches me to treat others with dignity and respect. My faith also teaches forgiveness and that is why I am restoring voting rights to over one hundred forty thousand Kentuckians who have done wrong in the past but are doing right now," Beshear, a Democrat, said in a statement. "I want to lift up all of our families and I believe we have a moral responsibility to protect and expand the right to vote."Beshear also lamented the state's voter access issues, asserting that Kentucky has the third-highest voter disenfranchisement rate nationwide with nearly 10% of people, and nearly 25% of African-Americans, in the state not being allowed to vote.

The move fulfills aÂ campaign promiseÂ after Beshear'sÂ upset victoryÂ over former Republican Gov. Matt Bevin in November. It was a key point in Beshear's platform of progressive issues, including making Medicaid more accessible and replacing Bevin's state board of education.TheÂ orderÂ states that more than 140,000 Kentuckians were unable to vote despite completing their prison terms for non-violent felonies, and that Kentucky was one of two states that did not automatically restore voting rights to former felons. The order does not apply to those incarcerated for treason, bribery in an election and many violent offenses.

Voting rights measures coming from the governor's office have been a point of contention in Kentucky across several administrations. Beshear's father, former Gov. Steve Beshear, issued anÂ executive orderÂ in 2015 restoring felons' voting rights. But Bevin promptly reversed it with his ownÂ executive orderÂ upon taking office later that year.Bevin said at the time that while he supported "the automatic restoration of civil rights" for qualifying former felons, he believed "that such restoration must come through an amendment to the Kentucky Constitution and not by executive action."

Under theÂ Kentucky Constitution, those with felony convictions lose their voting rights but "may be restored to their civil rights by executive pardon."Kentucky is not alone in vacillating on the issue. Last year, FloridaÂ restored voting rightsÂ to over 1 million former felons through a ballot initiative. But earlier this year, the state's House passed a bill that would make it harder for ex-felons to vote by requiring that they pay all financial obligations to the state before heading to the polls, a measure that opponents have likened to a "poll tax."