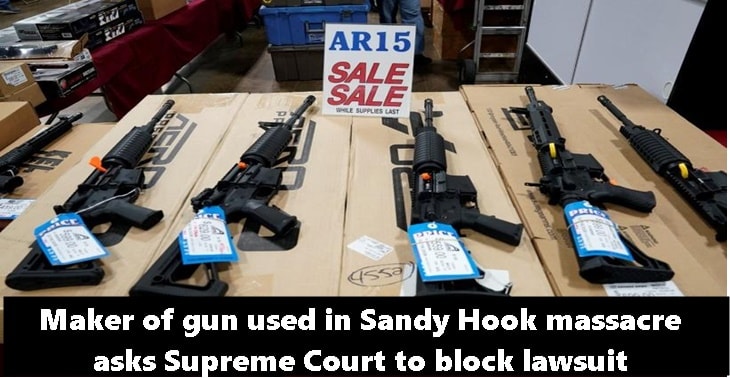 The maker of the assault-style rifle used in the 2012 mass shooting at a Newtown, Connecticut, school asked the U.S. Supreme Court on Thursday to overturn a court ruling that allowed families of the victims to sue the company over its marketing practices.

Gun maker Remington Outdoor Co [FREDM.UL] made its plea to the nationâs top court after the Connecticut Supreme Court in March reinstated a wrongful death lawsuit against the gun maker by the families of nine people slain and one survivor of the Sandy Hook Elementary School massacre.

The families argued that the Remington AR-15 Bushmaster rifle that a 20-year-old gunman used to kill 20 children aged 6 and 7 and six adult staffers was a weapon of war that was wrongly marketed to civilians for use in combat-style missions.

The gun maker argued that the lawsuit should never have been allowed to proceed because a 2005 federal law, the Protection of Lawful Commerce in Arms Act, shields gun manufacturers in most cases from liability when the firearms they produce are used in crimes.

While the law has an exemption for claims involving manufacturers who knowing violate the law to sell or market guns, Remingtonâs lawyers argued that the Connecticut Supreme Court interpreted it too broadly to allow the case to proceed.

âThis case is an archetypical example of the kind of lawsuit Congress sought to preempt,â Remingtonâs lawyers wrote.

They argued the Connecticut ruling threatens to unleash a flood of lawsuits against the firearms industry, despite Congressâ intention in 2005 to protect them from liability after an earlier wave of similar lawsuits against gun manufacturers.

The filing was long expected. Josh Koskoff, a lawyer for the family members, said Remingtonâs filing made no new or unexpected arguments.

âOur stateâs highest court has already ruled that the families deserve their day in court and we are confident that the U.S. Supreme Court will defer to that well-reasoned opinion,â he said in a statement.

The family members filed the lawsuit in 2014 against Remington and other defendants, including the gunâs distributor and the gun shop where the shooterâs mother had bought the AR-15.

A lower-court judge in 2016 dismissed the case. In a 4-3 decision, the Connecticut Supreme Court said while most of the lawsuitâs claims could not proceed, Remington could still be sued over its marketing under Connecticut law.