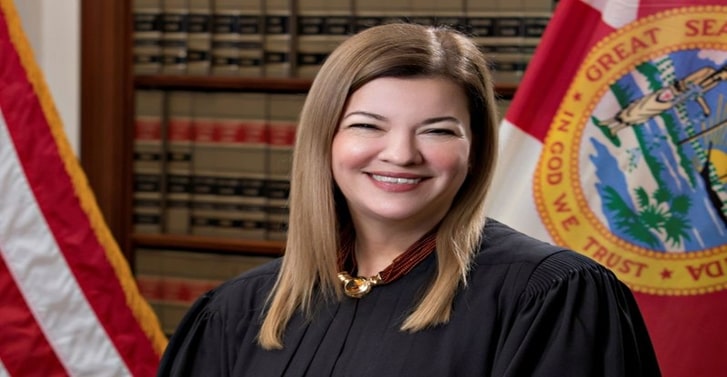 (Reuters) - Barbara Lagoa, the Cuban-American federal appellate judge under consideration by President Donald Trump for the U.S. Supreme Court, is a conservative jurist whose resume includes a role in a heated international custody battle and the distinction of being the first Hispanic woman to serve on Floridaâs top court.If picked by Trump and confirmed by the U.S. Senate to replace liberal Justice Ruth Bader Ginsburg, who died of pancreatic cancer at age 87 on Friday, Lagoa, 52, would become only the second Hispanic to serve on the Supreme Court, following current Justice Sonia Sotomayor. She would give the court a 6-3 conservative majority.Lagoa has less than a year of experience as a federal judge, having joined the Atlanta-based 11th U.S. Circuit Court of Appeals last December after being appointed by Trump and confirmed by the Senate in a 80-15 bipartisan vote. The 11th Circuit is one of the regional appeals courts that are one step below the Supreme Court.A victory in Florida is seen as crucial for Trumpâs Nov. 3 re-election chances. Choosing a Hispanic judge from the state potentially could give him a boost among Floridaâs voters.While Lagoa has not served long on the 11th Circuit, she took part in a major ruling reversing a judgeâs decision striking down a Florida law that requires that people with past serious criminal convictions pay all fines, restitution and legal fees before regaining the right to vote. Critics have compared the Republican-backed law to poll taxes imposed in the past in some states to keep Black people from voting.Republican Florida Governor Ron DeSantis, a close ally of Trump, named Lagoa to the Florida Supreme Court - his first official act in the job - in January 2019, a major career boost for the former federal prosecutor who had served on an intermediate state court since being appointed by Republican former Governor Jeb Bush in 2006.Lagoa is a member of Floridaâs large and politically influential Cuban-American community. Her parents fled Cuba after Fidel Castroâs communist revolution. She grew up in Hialeah outside Miami, graduated from Florida International University and earned her law degree at Columbia University, the same Ivy League school as Ginsburg did.

In 2000, she played a role in a major international incident between the United States and Cuba involving a 5-year-old boy named Elian Gonzalez who was rescued from the ocean after his mother drowned while fleeing Cuba with him. The boyâs father in Cuba sought his return and a legal battle ensued.Lagoa provided free legal services to Cuban-American relatives of the boy who had sought to keep him in the United States. Ultimately, he was sent back to Cuba.Lagoa has said her parentsâ flight from Castroâs Cuba shaped her views and career.âIn the country my parents fled, the whim of a single individual could mean the difference between food or hunger, liberty or prison, life or death,â Lagoa said at an event last year. âUnlike the country my parents fled, we are a nation of laws, not of men.âThe liberal activist group Alliance for Justice has said Lagoaâs decisions âraise concerns that she will side with the wealthy and powerful at the expense of everyday Americans as a federal judge.âIt also cited a 2019 ruling in which Lagoa sided with businesses challenging Miami Beachâs minimum wage, as well as a decision she joined that made it harder for homeowners to fight foreclosure proceedings.That year, Lagoa upheld DeSantisâ suspension of a sheriff for alleged incompetence following a mass shooting at a high school in Parkland, Florida.Trumpâs advisers see Lagoa as someone who would be a reliable conservative vote on the Supreme Court, said University of Richmond law professor Carl Tobias, who studies judicial nominations.Leonard Leo, who has been a key figure in the Federalist Society conservative legal group and worked closely with Trump on his Supreme Court appointments of Justices Neil Gorsuch in 2017 and Brett Kavanaugh in 2018, interviewed and endorsed Lagoa when she was under consideration for Floridaâs top court.âShe doesnât shy away from her Federalist Society credentials and being conservative,â Tobias said.The Florida Family Policy Council, a group that opposes legalized abortion and LGBT rights, said last year Lagoa âhas a conservative judicial philosophyâ and âis also deeply committed to her faith.â Lagoa is Roman Catholic and attends a church in Miami.In her interview for the Florida Supreme Court, Lagoa described herself as a âlegal nerd.ââI am a tough questioner and I ask pointed questions, but I always do so respectfully,â Lagoa said.Lagoaâs husband, Paul Huck Jr., is a lawyer in the Miami office of Jones Day, a law firm often involved in Republican causes. They have three daughters. Lagoaâs father-in-law, Paul Huck Sr., is a semi-retired federal judge in Miami, appointed by Democratic former President Bill Clinton. She speaks fluent Spanish.