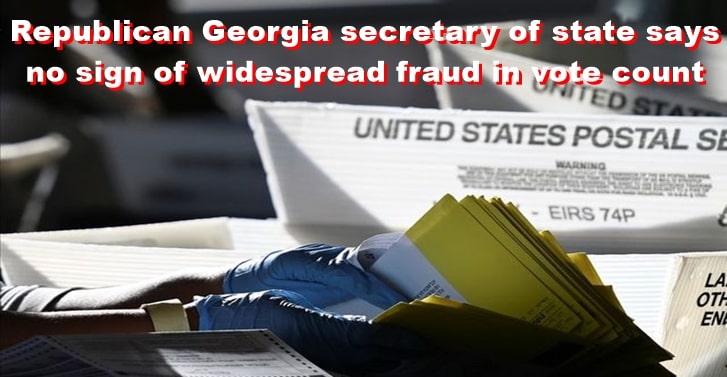 Georgiaâs Republican Secretary of State said on Wednesday there was no sign yet of widespread fraud in his stateâs vote count, where Democratic President-elect Joe Biden currently has a 14,000 vote lead over President Donald Trump.

Brad Raffensperger, in an interview with CNN, said he has ordered a hand recount because of the closeness of the vote count, but he believed votes had so far been tallied accurately. Bidenâs current lead, with nearly all votes counted, is 0.3%.

Asked about voter fraud, Raffensperger said: âWe have ongoing investigations but we have not seen something widespread.â He added there was no evidence yet of any discrepancies large enough that could reverse Bidenâs lead.

Raffensperger said he also believed a hand recount, which he wants completed by Nov. 20, will not overturn the machine count that is near completion. âWe believe the ballots were counted accurately,â he said.

The Georgia recount will take place as Republican Trump, who has refused to concede the election to Biden, pushed ahead with legal challenges in several states to try and upend the result.