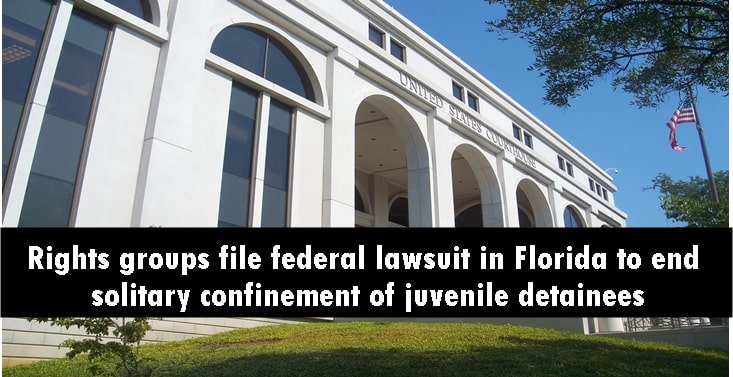 The Southern Poverty Law Center (SPLC), Florida Legal Services, and the Florida Justice Institute filed a suit in the United States District Court Northern District Of Florida in Tallahassee on Thursday calling for an end to solitary confinement as a punishment in Floridaâs juvenile detention facilities.

The lawsuit filed on behalf of several minor plaintiffs as a class action under Federal Rule of Civil Procedure Rule 23. The class action alleges that plaintiffs have suffered harm that violates the Eighth and Fourteenth Amendments with no adequate remedy at law. The suit is a federal civil action for deprivation of rights brought under 42 U.S. Code Â§â¯1983 due to the poor conditions in solitary confinement. Plaintiffs allege other violations of provisions of the Americans with Disabilities Act and Section 504 of the Rehabilitation Act for absence of appropriate mental health services for the children.

The lawsuit alleges âchildren are isolated from others in a locked room for an indefinite period of time with no meaningful social interaction or environmental stimulation.â The lawsuit cites Florida Administrative Code Rule 63G-2.022, which in 4(b) states:

âThe time limit for placement of a youth in confinement is no more than eight hours unless the superintendent or his or her designee grants an extension because release of the youth would imminently threaten his or her safety or the safety of others.â

The lawsuit alleges children are left in solitary confinement for âhours or days at a time,â notwithstanding the 72 hour limit for confinement set by 63G-2.022(4)(h).

Plaintiffs additionally assert that these cells are often small, cramped, dirty, sometimes infested with bugs, and contain poor plumbing. The children are isolated and are not given any educational or recreational materials. They are not even provided a mat for their concrete slab in the cell until nighttime and they are still subjected to fluorescent lights 24 hours a day.

The suit requests that the Court assume jurisdiction and declare the conditions in violation of the rights of the Plaintiffs (and the class of Plaintiffs), enjoin Defendants from continuing these practices, and order Defendants to develop and implement a plan to eliminate the risks of harm due to these practices.

In a release from the Florida Justice Institute, Dante Trevisani, the executive director, commented:

âAs we learn more about the horrific effects solitary confinement has on an individual, many places in the United States and throughout the world are actively seeking to end the use of solitary.âBut Florida is an outlier that continues to use the practice. Itâs time to join the rest of the world and recognize there are better ways to deal with children who need help and rehabilitation.â