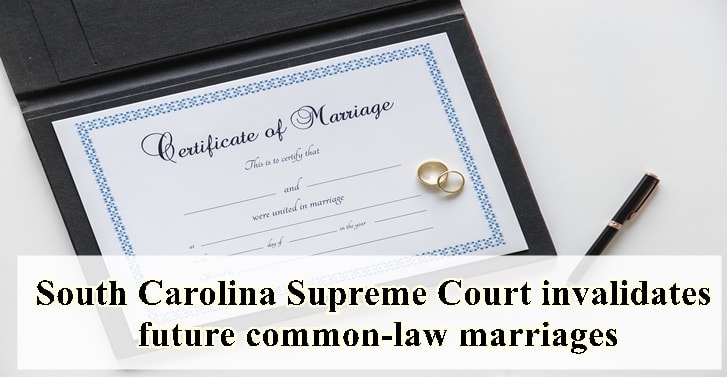 The court came to this conclusion reviewing a case that hinged on the âmutual assentâ requirement to prove a common-law marriage. In its review, the court chose to refine the test for legal marriages.

Justice Kaye Hearn focused her opinion on societal norms, which have shifted away from moral paternalism. Marital status is no longer a necessary measure or protection of inheritance rights or child support, and the fact that legal marriage ceremonies are inexpensive and accessible indicates that the choice to not marry (despite cohabitation) is an intentional choice.

Citing Obergefell v. Hodges, the fact that the right to marry is a fundamental constitutional right led the court to conclude that âthe right to remain unmarried is equally weighty, particularly when combined with our admonitions that a person cannot enter into such a union accidently or unwittingly.â

The state, as a result, adopted a bright-line rule that requires all future legal marriages âin South Carolina to obtain a lawful license.â

As a result of the ruling, South Carolina leaves a dwindling pool of states that still have a common-law marriage. Only nine states, including Texas, Utah and Colorado, and the District of Columbia have definitive legislation that outlines common-law marriage requirements.

The new ruling does not affect common-law marriages that are already in effect.