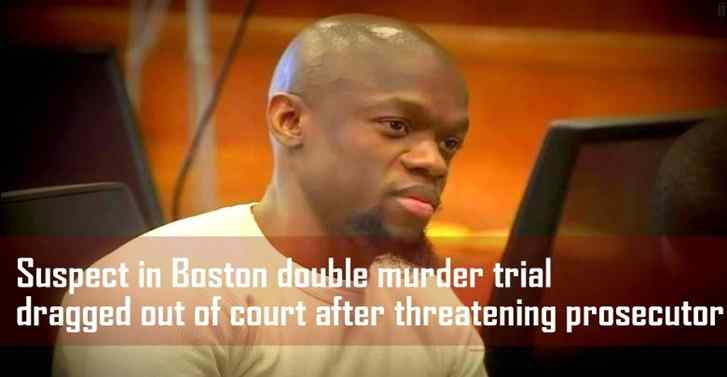 Boston -The man accused of brutally killingÂ two Boston doctors in their penthouse apartmentÂ in 2017 was dragged out of court on Tuesday morning after he threatened the prosecutor.Bampumim Teixeira, 33, entered the courtroom and began yelling at Suffolk County Assistant District Attorney John Pappas, who has led the prosecution's double murder case against Teixeira.

"Yo Pappas, you better hope I never get out of jail," he said.Teixeira then made derogatory threats regarding Pappas' wife before he was subdued by court officers.

Teixeira, who had worked as a concierge at the slain anesthesiologists' building, is accused of fatally stabbing 39-year-old Lina Bolanos and her 48-year-old fiancÃ©, Richard Field, and leaving them in pools of blood in their penthouse. He has pleaded not guilty. The jury, which began deliberations on Monday, was not present at the time of the outburst. The judge decided that Teixeira has forfeited his right to be present during proceedings due to the outburst. Suffolk County District Attorney Rachael Rollins said investigators in her office are reviewing video and interviewing court personnel and may file additional charges against him.

"The 300 employees in my office work tirelessly to make the communities in Suffolk County safe. I will never stand idly by if the safety of my employees or our communities is threatened," Rollins said.