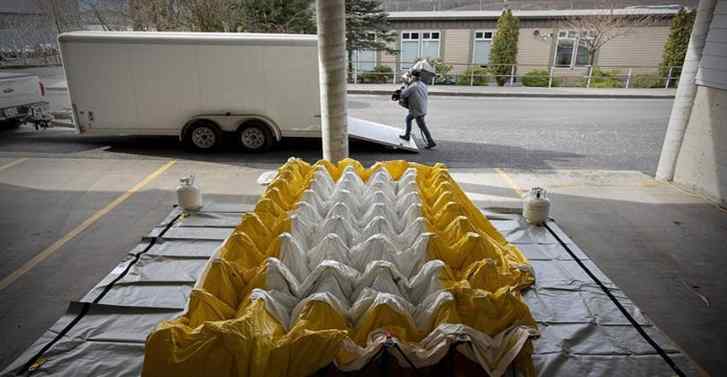 Gulf Shores:Â The state on ThursdayÂ ordered the closure of day cares, beaches and on-site dining in restaurantsÂ as it tries to contain the spread of the coronavirus. The measure expands restrictions that had been in place for six counties surrounding Birmingham to all 67 counties in the state, and it closes state beaches during the busy spring break season. The order requires all preschools and child care centers to close beginning Thursday. Alabama had already closed public schools until AprilÂ 6. There are exceptions for day cares that exclusively serve hospitals and first responders. All beaches in the state, whether private or public, were told to close at 5Â p.m. Thursday. All restaurants must end on-site dining, although takeout and delivery may continue. Officials in Gulf Shores and Orange Beach had struggled with larger-than-usual crowds after neighboring Florida cracked down on spring break partying.

Phoenix:Â Arizona State Universityâs Biodesign InstituteÂ hopes to dramatically increase available coronavirus testing by using robots that can process a high volume of samples simultaneously, with a goal of opening a drive-thru testing site for the general public as early as Monday. By using robots to process the samples, Biodesign Institute executive director Joshua LaBaer said, ASU can offer testing at a faster rate than state and hospital labs. Faced with a testing kit bottleneck, health care officials and the state have lacked the ability to conduct widespread testing to screen for the virus, even among those who may be exhibiting symptoms or who are at risk already. If successful, ASU believes it could provide a crucial service that could start to turn the tide in fighting this outbreak. Meanwhile, health officials reported more than a dozen newly confirmed cases Thursday morning, raising the total to 44 people with COVID-19, up from 30.

Little Rock:Â The city on Thursday temporarily prohibited in-person service at restaurants and bars as the number of coronavirus cases in the state continued to rise. Little Rock Mayor Frank Scott announced the closure will take effect at 8Â a.m. Friday and said the move was approved by state officials. Scott announced the move shortly after state health officials said the number of coronavirus cases in Arkansas had risen to 46. âFor now this is our new normal,â Scott said. He said the establishments will be allowed to provide takeout, curbside and home delivery services. He said the city will temporarily allow the restaurant and bar facilities to be used for other purposes such as specialty grocery stores, as long as the maximum occupancy doesnât exceed 10 people.

Sacramento:Â As worries about the spread of the coronavirus confine millions of Californians to their homes, concern is growing about those who have no homes in which to shelter. Gov. Gavin Newsom estimates up to 60,000 homeless could end up infected. The state has more than 150,000 homeless people, the most in the nation, and as the rest of the stateâs residents are being told to stay apart and to frequently wash their hands, the homeless are living just as they did before the outbreak. The virus is spread by coughing and sneezing and could easily sweep through homeless encampments, where people live close together, and hygiene is poor or nonexistent. There is one confirmed death of a homeless person in California so far. Newsom said the person died in Santa Clara County, just south of San Francisco. Newsom on Wednesday announced spending of $150Â million on efforts to shield that population from the virus.

Denver:Â The state is suspending in-person classes at all schools across the state, ordering longer ski resort closures and prohibiting gatherings of more than 10 people in an effort to stem the spread of the coronavirus, Gov. Jared Polis said Wednesday. Polisâ executive order said the new restrictions on schools would take effect Monday and last until at least AprilÂ 17. The state had allowed individual districts to decide whether to stay open, but distance learning was encouraged. Denver and some other districts have already suspended in-person classes. Polis ordered the stateâs ski resorts to remain closed through AprilÂ 6. âThe science and data tells us this will get worse before it gets better,â he said. âWe are in this together, and the state is taking the necessary actions to slow the spread of this disease.â Health officials said Thursday that a man in his 60s has died, marking the stateâs third coronavirus death.