They threw us into chaos': Wisconsin lockdown ruling is latest in partisan war 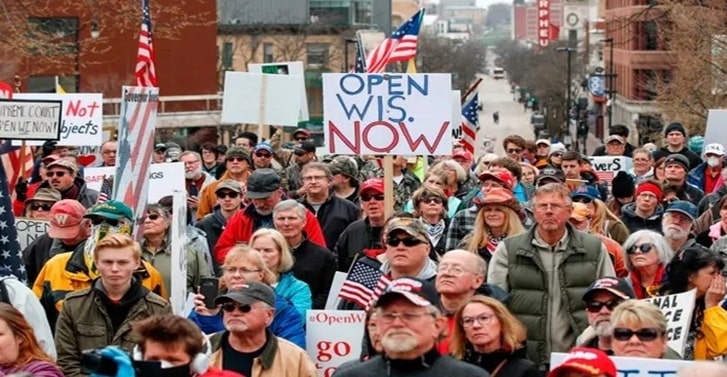 Wisconsin supreme court ruling striking down Democratic governorâs stay-at-home order underscores division in the stateconservative majority on theÂ WisconsinÂ supreme courtÂ struck downÂ a stay-at-home order from the stateâs Democratic governor on Wednesday, further illustrating the remarkable amount of power Republicans have in the state and the way they haveÂ been able to curbÂ the authority of their Democratic rivals.The Wisconsin decision is the most significant legal victory for conservatives, egged on by Donald Trump, who are beginning to challenge stay-at-home orders across the country through protests and legal actions. Republican lawmakers in Michigan, where the legislature isÂ extremely gerrymandered, are alsoÂ challengingÂ the legal authority of a similar order issued by the stateâs Democratic governor there. Other suits from businesses challenging stay-at-home orders in other states have been largely unsuccessful, so far.The decision was the latest in a nasty partisan battle in Wisconsin between Republicans and Democrats that has shaped the last decade. The state is narrowly divided politically and seen as a crucial state to win for both campaigns in the November presidentialÂ election.The case also shows the extreme significance of state supreme court races, long overlooked, in shaping state policy. Justice Daniel Kelly, a conservative on the court,Â lost his seatÂ to Jill Karofsky, a liberal challenger, last month. Kelly, who is set to leave the court this summer, cast the deciding vote in the Wednesday ruling.In Wisconsin, conservatives hold a 5-2 majority on the state supreme court, and all but one of the conservative justices voted to strike down the order on Wednesday, saying Tony Evers, the Democratic governor, didnât follow proper procedure when he issued the order. Some businesses immediately opened after the ruling and some bars wereÂ floodedÂ with patrons.

Republican legislators have convinced four justices to throw our state into chaos,â Evers said in a statement.In a remarkable passage in a concurring opinion, Justice Rebecca Bradley drew comparisons between the case andÂ Korematsu vÂ United States, the 1946 US supreme court decision allowing the internment of Japanese-Americans during the second world war. She cited the case âto remind the state that urging courts to approve the exercise of extraordinary power during times of emergency may lead to extraordinary abuses of its citizensâ.Since 2012,Â RepublicansÂ have held significant majorities in both chambers of the state legislature, in large part because they drew boundaries for districts at the beginning of the decade that gave them a severe political advantage. They have maintained that advantage even though the state is extremely competitive politically â Trump narrowly won the state in 2016, but Evers and other Democrats swept statewide races in 2018.Republicans have been trying to strip Evers of power even before he took office. During a 2018 lame duck session, Republicans quickly passed laws that stripped Evers and the stateâs incoming attorney general of some of their power. The move was ultimately upheld by the state supreme court in aÂ 4-3 voteÂ along partisan lines.The state supreme court also voted along partisan lines last monthÂ to overrideÂ a last-minute order from Evers to cancel in-person voting for the stateâs 7 April election. The decision was widely seen as a partisan effort to boost Kelly, who was on the ballot, but he wound up losing handily to Karofsky.The state supreme court is also expected in the near future to take up a closely watched case deciding whetherÂ WisconsinÂ election officials need to remove more than 200,000 people from the voter rolls ahead of the November election â a decision that could have huge political consequences in the state.Justice Rebecca Dallet, a liberal on the court, wrote in a dissenting opinion on Wednesday that the supreme court had done âthe legislatureâs biddingâ in striking down the measure.âThis decision will undoubtedly go down as one of the most blatant examples of judicial activism in this courtâs history,â she wrote. âAnd it will be Wisconsinites who pay the price.âA majority of this court falls hook, line and sinker for the legislatureâs tactic to rewrite a duly enacted statute through litigation rather than legislation.â