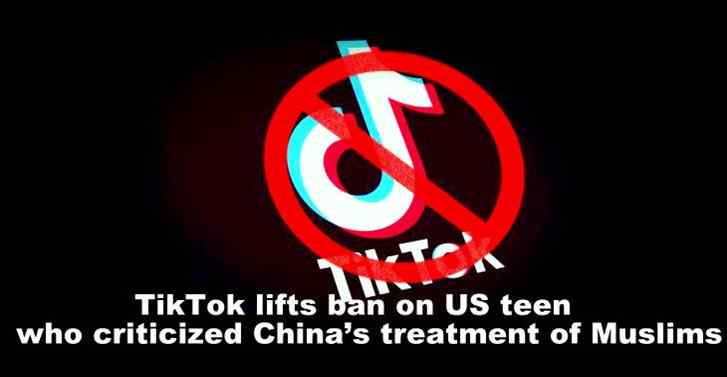 TikTok has lifted its ban on an American teen who says she wasÂ blocked from the platformÂ after sharing a viral video criticizingÂ ChinaâsÂ treatment of minority Uighur Muslims. The app claimed that 17-year-old Feroz Aziz was prevented from accessing her account due to association with a separate profile which posted a video including an image of Osama bin Laden. It cited policies on terrorist-related content and said: âno China-related content was moderated on this account.â

Owned by Chinaâs ByteDance, TikTok has drawn the attention ofÂ U.S.Â lawmakers who areÂ concernedÂ the company may be censoring politically sensitive content deemed offensive to Beijing. The U.S. government is nowÂ looking into ByteDanceÂ over concerns that its 2017 acquisition of Musical.ly poses a national security risk.TikTok has also beenÂ blastedÂ byÂ FacebookÂ CEO Mark Zuckerberg, who claimed the app censored users posting about pro-democracy protests in Hong Kong. However, TikTok has denied it removes content from the app over âsensitivities around China.â

China has forced as many as 1 million Muslims into internment camps in the western part of the country, where they undergo indoctrination and interrogation designed to turn them into supporters of the Chinese Communist Party, according to aÂ trove of documentsÂ revealed by the New York Times this month. InÂ a report last year, the United Nations referred to the western Xinjiang region of China as a âno rights zoneâ where Muslims are treated as âenemies of the state.â Beijing says it is fighting religious âextremism.â

In aÂ blog postÂ late Wednesday, TikTok detailed a timeline of events that led up to Azizâs ban and the temporary removal of her clip. The firm said she uploaded footage of herself talking about the treatment of Uighurs in China on Nov. 23 using a different TikTok handle. The firm further explained that it locked her out of that new account due to a âscheduled platform-wide enforcementâ action. It said moderators banned 2,406 phones associated with accounts that had been blocked due to breaching content guidelines.

âBecause the userâs banned account (@getmefamousplzsir) was associated with the same device as her second account (@getmefamouspartthree), this had the effect of locking her out of being able to access her second, active account from that device,â TikTok claimed. âHowever, the account itself remained active and accessible, with its videos continuing to receive views.âThe clip in question, which has over 1.5 million views, shows the U.S. teen pretending to do an eyelash curling tutorial, only to then urge other TikTok users to âsearch up whatâs happening in China.â In the video, Aziz refers to the countryâs treatment of the Uighur community as âanother holocaust.â

On Wednesday, TikTok says, Azizâs video was removed temporarily âdue to a human moderation error.â The company apologized to Aziz for the incident and said it had decided to âoverrideâ the ban on her account.âOur moderation approach of banning devices associated with a banned account is designed to protect against the spread of coordinated malicious behavior â and itâs clear that this was not the intent here,â the firm said.

But Aziz was unconvinced by the platformâs explanation for blocking her from accessing her account: âDo I believe they took it away because of an unrelated satirical video that was deleted on a previously deleted account of mine? Right after I finished posting a 3 part video about the Uyghurs? No.âSince its launch in 2017, TikTok has racked up over 1 billion users worldwide. ByteDance runs the app in China under a different name â Douyin.