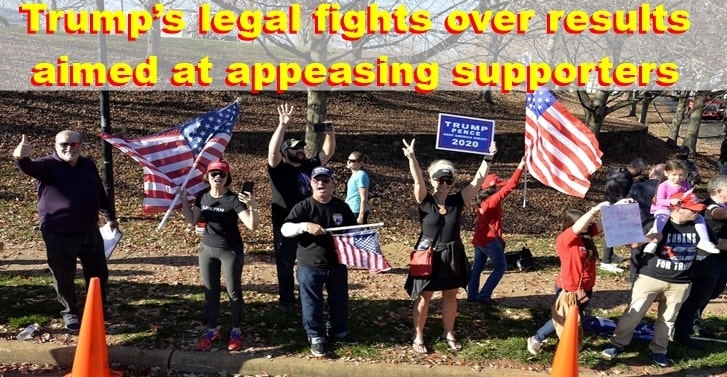 U.S. PresidentÂ Donald TrumpÂ has promised legal action in the coming days as he refused to concede his loss to Democrat, making an aggressive pitch for donors to help finance any court fight. Trump and his campaign have levelled accusations of large-scale voter fraud in Pennsylvania and other states that broke for Biden, so far without proof.

But senior officials, campaign aides and allies told The Associated Press that overwhelming evidence of fraud isnât really the point. The strategy to wage a legal fight against the votes tallied for Biden in Pennsylvania and other places is more to provide Trump with an off-ramp for a loss he canât quite grasp and less about changing the electionâs outcome, the officials said. They spoke to AP on the condition of anonymity to discuss internal strategy. Trump aides and allies also acknowledged privately the legal fights would â at best â forestall the inevitable, and some had deep reservations about the presidentâs attempts to undermine faith in the vote. But they said Trump and a core group of loyalists were aiming to keep his base of supporters on his side even in defeat.

There has been no election in decades in which such widespread fraud was alleged. The closest was the 1960 election in which Democrat John F. Kennedy beat Republican Richard Nixon, and there were allegations that fraud helped Kennedy win. Moments after the AP called the race for Biden, Trump attorney Rudy Giuliani stood in front of campaign banner taped over the garage door of a landscaping company in Philadelphia, wedged between a cremation centre and an adult book store, with a handful of poll watchers and declared theyâd been kept too far away to check for any inaccuracies.

âWe have no way of knowing, because weâve been deprived of the right to inspect ballots,â he said.Partisan poll watchers are designated by a political party or campaign to report any concerns they may have. They are not poll workers who actually tally ballots. Monitoring polling places and election offices is allowed in most states, but rules vary and there are certain limits to avoid any harassment or intimidation. They are not allowed to interfere with the conduct of the election and are typically required to register in advance with the local election office.

This year, because of the coronavirus that has killed more than 230,000 people across the country, there was litigation in a few states, including Pennsylvania, over where poll watchers could stand to ensure social distancing. Lawyers could potentially argue the vote tally should be cast aside over fraud observed by poll watchers, but in order to win that argument theyâd need evidence, not just allegations the monitors werenât allowed to see clearly enough. Judges are loathe to disenfranchise any voters and there would need to be substantial proof that fraud had damaged the count so much that it must be set aside.

Democratic poll watchers, who were also given the same access, have not raised concerns. Giuliani called evidence of fraud circumstantial at the news conference. He said heâd be filing suit in federal court, but the issue has already been before judges. A federal judge in Philadelphia Thursday night ordered the two sides to work out an agreement on the number of poll watchers and how close they could be to the counting. The judge also voiced concerns about the safety of poll workers during the pandemic if poll watchers were allowed to peer over their shoulders. On Fox News ChannelâsÂ Sunday Morning FuturesÂ Sunday, Giuliani said two additional lawsuits were in the process of being drafted, in addition to existing litigation in Pennsylvania.

By the end of this week, Giuliani predicted the campaign would have filed âfour or fiveâ lawsuits, with a total of 10 possible. Voter fraud is extremely rare, and when it does happen, people are generally caught and prosecuted and it does not change the outcome of the election. Typically, it involves someone wanting to honour the wishes of a loved one who recently died and either knowingly or not commits a crime by filling out that ballot.