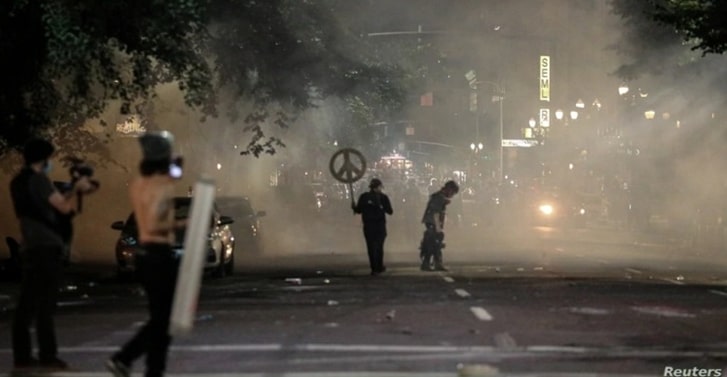 WHITE HOUSE - U.S. President Donald Trump plans to expandÂ theÂ controversial presence of federal law enforcement on the streets of American citiesÂ toÂ deter what he decries as unacceptable violence.Â Â Trump, in comments to reporters on Monday in the Oval Office,Â remarkedÂ that federal forces on the streets of downtown Portland, Oregon, have done âa fantastic jobâ during the past three days.Â Â Portlandâs Mayor Ted Wheeler disagrees, telling reporters this week that the actions by federal law enforcement officials are âa blatant abuse of police tactics by the federal governmentâ which Wheeler calls unconstitutional. The Oregon attorney general is asking a federal judge for a restraining order to prevent the federal agents from making any more arrests.Â Â City and state officials say the para-military personnel, apparently drawn from several federal law enforcement agencies but displayingÂ no identification, are exacerbatingÂ tensions with protesters.Â And more deployments are planned in other U.S. cities.Â Â The U.S. Department of Homeland SecurityÂ (DHS) is planning to deploy about 150 federal agents to Chicago this week, according to theÂ Chicago Tribune.At least 71 people were shot, 12 of them fatally, from Friday afternoon to Monday morning in Chicago, according to the newspaper.Â Â Trump mentionedÂ MondayÂ the possibility of dispatching forces to New York City, where he said politicians from the Democratic Party âhave no idea what theyâre doing.âÂ Â The president also indicated the situation is intolerable in Philadelphia, Detroit, Baltimore and Oakland.

The president argues the additional law enforcement personnel are necessary because he claims local officials are âphysically afraidâ of the protesters, whom Trump characterizes as âanarchists.âÂ Â âThey hate our country and weâre not going to let it go forward,âÂ he said.Â Many of the protesters have continued to demonstrate against systemic racism and police treatment of Black Americans. In Portland and other U.S. cities, peaceful protests have continued nearlyÂ everyÂ day,Â along withÂ vandalism, clashes with police officers andÂ someÂ looting.Â Â The president has called the protestÂ violence, as well as homicides unrelated to the demonstrations, âworse than Afghanistan.âÂ Â Videos posted to social media from Portland have shown people â some contending they were not participating in protestsÂ âÂ put into unmarked vehicles by federal personnelÂ who are not displaying identification. Some of those detained say they were arrested without warning,Â held and questionedÂ before being released without charges.Â Â Â DHSÂ Acting Deputy Secretary Ken CuccinelliÂ acknowledged Friday toÂ National Public RadioÂ thatÂ federal agents used unmarkedâ¯carsâ¯to pick up people in Portland, butÂ said it was done to keep officers safe and away from crowds and to move detainees to a "safe location for questioning."â¯Â Democrat lawmakers strongly opposeÂ the actions.Â Â The chairs of three House committees on Monday issued a joint statement decrying that âmany of these federal officers have apparently been patrolling the streets in unmarked vehicles and arresting protestors off the street â in some cases without probable cause and without reading their Miranda rights â all while donning what appears to be military uniforms.âÂ Â â¯Jerrold Nadler, chairman of the House Judiciary Committee, Adam Smith, who chairs theÂ House Armed Services CommitteeÂ and Bennie Thompson, chairman of the House Homeland Security Committee,Â saidÂ the actions are âsimply unacceptable, and it must stop.âÂ The committee chairs haveâ¯sent a letterÂ â¯to theÂ inspectorsÂ general of theÂ JusticeÂ Department andÂ DHSÂ demanding an immediate investigation into theâ¯Trump administration'sÂ âuse of violent tactics against peaceful protestors in Washington D.C., Portland, Oregon, and elsewhere around the country.âÂ Â TheÂ American Civil Liberties UnionÂ says it is filing legal actions against DHS and the Marshals Service to stop what it calls âunconstitutional attacksâ on protesters, journalists and legal observers.Â Â

A federal law enforcement official points to demonstrators before firing tear gas during a protest against racial inequality in Portland, Oregon, July 19, 2020.âThis is a fight to save our democracy,â said Kelly Simon, interim legal director with the ACLU of Oregon. âUnder the direction of the Trump administration, federal agents are terrorizing the community, risking lives, and brutally attacking protesters demonstrating against police brutality.âÂ Â Federal agencies contend their actions are legal and they have broad authority to conductÂ them.Â Â TrumpÂ hasÂ signed an executive order directing federal agencies to send personnel to protectÂ federal property, monuments andÂ statues, promptingÂ DHS to formÂ ârapid deployment teams.âÂ TheÂ use of federal force in Portland isÂ âperformative authoritarianism,â said Anne Applebaum, authorÂ of âTwilight of Democracy,â on CNN Sunday.Â âThat's designed to appeal to a certain kind of voter who wants to see this control put onto contemporary events.âÂ Anti-policeâ¯demonstrationsâ¯have been flaring up across the country since George Floyd, a Black man, died inâ¯the custody of white police officers in Minneapolis in May.â¯Â Many of the marches have been peaceful,Â butÂ someÂ have turned violent.â¯Â Portland police declared a riot Saturday night after some protesters massed outside a police precinct buildingÂ vandalizedâ¯cars and bellowedâ¯obscenitiesâ¯at officers.â¯â¯Â â¯Â A Portland Police Association building wasâ¯setâ¯on fire, butâ¯theâ¯flames were quickly putâ¯out.â¯Portland police say seven people were arrested.â¯Â Trump, in recent comments at the White House and elsewhere,Â has been warning that the safety of Americaâs cities willÂ deteriorate if he loses this Novemberâs presidentialÂ election, accusing the Democrats of being soft onÂ lawlessness.Â Â âIf Joe Biden got in, the whole country will go to hell,â Trump said to reporters in the Oval Office on Monday.Â Â He has also accused Biden, the former vice president and presumptive Democratic Party nominee for president, of wanting to âdefund the police.âÂ Biden has saidÂ he opposes that,Â but does favor conditioning federal aid to policeÂ departments,Â based on meetingÂ âstandards of decency and honorableness.âÂ Â