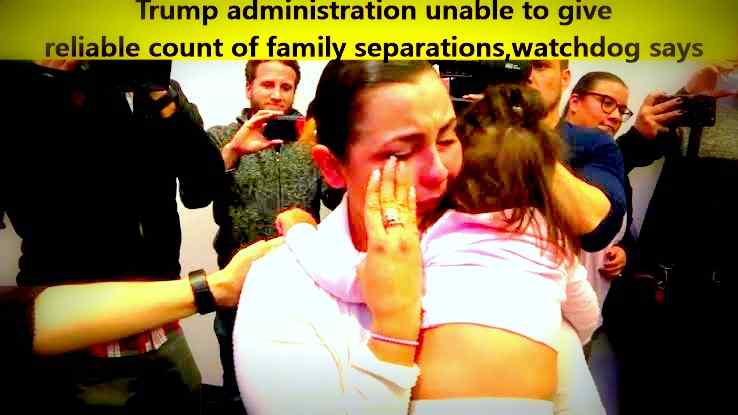 Washington -The Trump administration is unable to verify the total number of families separated or reunited in the wake of its "zero tolerance" policy, because of "widespread errors" in tracking data, according to a new Homeland Security inspector general report. TheÂ government watchdog foundÂ that the department did not have the information technology system needed to track separated migrant families. Rather, Customs and Border Protection "adopted various ad hoc methods to record and track family separations."

The controversial policy, which aimed to refer all adults entering the US illegally for prosecution, caused outrage among activists, lawyers, and the public, and eventuallyÂ led to a presidential executive orderÂ calling for families to be kept together. According to the government report, the Trump administration estimated that more than 26,000 children would be separated between May and September 2018, due to the zero-tolerance policy. Customs and Border Protection provided those plans to the Office of Management Budget in early May 2018.

Despite the large numbers expected, the Department of Homeland Security "did not address deficiencies," which had been previously recognized and documented, that "could potentially hamper the ability to track separated families," according to the report. For example, on May 4, 2018 -- the same day Homeland Security Secretary Kirstjen Nielsen signed the memorandum implementing the zero-tolerance policy -- Border Patrol instructed field personnel to use spreadsheets to track separations because database system changes were still pending.

Guidance to field personnel who were going to carry out the policy was also "deficient," the report found. Deficiencies in tracking separations and reunifications have been widely reported, as well as revealed in an ongoing court case. The newly released inspector general audit is a follow-up to a September report that found the department was not fully prepared to implement the policy or deal with its aftermath. Since the end of the policy,Â top Homeland Security officialsÂ have acknowledged the department's inability to efficiently reunite families and have said itÂ caused the public to lose trustÂ in the department.

"The downstream effect of ad hoc typing in case notes became apparent when CBP headquarters began efforts to identify separated families needing reunification after the policy ended in June 2018," according to the latest report. Officials were aware of the deficiencies since at leastÂ November 2017, months before the full policy was rolled out, according to the latest report.

The inspector general's office identified 1,233 children with potential family relationships that were not accurately recorded by CBP, between October 2017 and February 2019. The department estimated that Border Patrol agents separated 3,014 children from their families while the policy was in place. An estimated 2,155 reunifications in response to a court order. However, according to the report, "without a reliable account of all family relationships," the inspector general "could not validate the total number of separations or reunifications."Additionally, the report found that the zero-tolerance policy didn't achieve its intended goal of ending the so-called "catch-and-release."

The department concurred with the inspector general's recommendations in the latest audit but took issue with some of the methodology used. The draft report "included inflated numbers that will lead to misunderstandings and misperceptions" of the department's efforts and compliance with court orders, wrote DHS liaison to the inspector general, Jim Crumpacker.