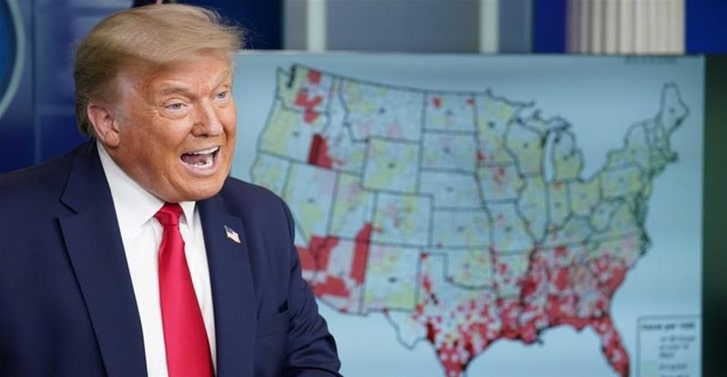 The US Supreme Court earlier rejected Trump's argument that he was immune from state criminal probes while in office.US President Donald Trump on Monday filed a new challenge to the Manhattan District Attorney's subpoena for his tax returns, weeks after the United States Supreme Court said the president was not immune from state criminal probes.In their new court papers, Trump's lawyers said the subpoena of his tax records was "wildly overbroad" and "amounts to harassment of the President".They said the subpoena seeks detailed information about all of Trump's assets in the US and abroad for a 10-year period."Simply put, it asks for everything," the lawyers wroteTrump's lawsuit said the subpoena concerns entities in California, Florida, Hawaii, Illinois, New Jersey, North Carolina, Pennsylvania, Virginia, and the District of Columbia. It said other affected entities are located outside the U.S., including in Canada, the Dominican Republic, Dubai, India, Indonesia, Ireland, the Philippines, Scotland, and Turkey.

Trump's lawyers complaint alleges prosecutors are seeking information about every asset owned by the Trump organisation. [File: Eric Thayer/Reuters]"Taken together, the subpoena demands an accounting and analysis of every single asset and liability of the President, including each one of the listed entities," the lawyers wrote, calling the request "an overreaching demand designed to pick apart the President."Trump, who is seeking re-election on November 3, has fought to keep his tax returns secret.Manhattan District Attorney Cyrus Vance subpoenaed Trump's accounting firm for eight years of his business and personal returns and other documents as part of a criminal investigation involving Trump and the Trump Organization, his familyâs real estate business.Carey Dunne, general counsel for Vance, on July 16 warned US District Court Judge Victor Marrero against allowing Trump to delay long enough to get beyond statutes of limitations.Trump filed suit last year to block Vance from getting his records, arguing the subpoena was invalid. On July 9, the US Supreme Court in a 7-2 vote, rejected his argument that he was immune from state criminal probes while in the White House.The high court said, however, that Trump could challenge the subpoena on other grounds.Vance's office noted in a filing this month that the judge had previously rejected Trump's claims that the subpoena was in bad faith, intended to harass or impair his presidential duties.Vance's investigation began after reports that Trump's former lawyer Michael Cohen paid pornographic film actress Stormy Daniels $130,000 to buy her silence before the 2016 election about having sexual encounters with Trump, which he has denied.Even if Vance prevails, grand jury secrecy rules make it unlikely Trump's financial records will become public soon. But that could change if charges are filed against other defendants.