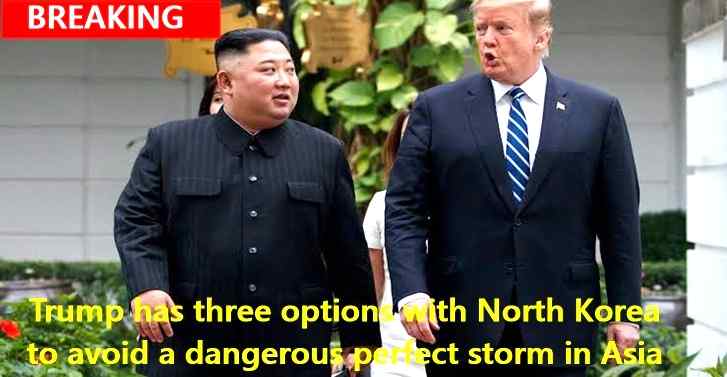 In the next few weeks, theÂ Korean PeninsulaÂ will face a watershed moment -- one which could upend the United States' alliances in northeast Asia and regional stability as a whole -- if three contentious issues are mismanaged. The three issues are USÂ diplomacy with North Korea; the fate of a key intelligence cooperation pact between South Korea and Japan; and negotiations for who pays to station US troops on the Korean Peninsula. All three are at a crossroads -- and all three are trending in the wrong direction.

The worst-case scenario is that these issues converge and lead to the premature reduction or withdrawal of US troops from South Korea, as North Korea and China assert themselves on the global stage. A cascade effect would lead to a perfect storm of instability in Asia and across the globe.

US diplomacy with North Korea

In April, North Korea unilaterally imposed a year-end deadline for the US to pitch a nuclear deal, or else Pyongyang said it would seek a "new way" to achieve economic and military might.US President Donald Trump faces three options to address the issue before the year is out. He could try to buy time by sending another "love letter" to Kim Jong Un; hold another summit with the North Korean leader, or insist on continuing with negotiations at the working level.

Each option comes with risks. The third option is the best, but Trump should intervene with another letter if a breakthrough or progress can't be made next month, in order to keep diplomacy open. In June,Â North Korean state media reportedÂ that Kim had received a "personal letter" from Trump that contained "excellent content."Another letter from Trump to Kim would give both sides some time to iron out how to advance theirÂ June 2018 Singapore summit statementÂ on achieving a new relationship, peace, and denuclearization and prevent a possible North Korean provocation.

For a love letter to work, Kim would still need a convincing talking point for his big New Year's Day address (which is sort of like his "State of the Union" speech) about why he is postponing his deadline. Flattery alone won't work. AfterÂ months of missile testsÂ that have putÂ South Korea and Japan at risk, Pyongyang has been escalating its rhetoric and military actions on a near-daily basis in recent weeks. It has used a combination of blatant threats, military demonstrations and stringent preconditions for any serious discussion on its nuclear weapons -- like ending sanctions and defensive drills held jointly by the US and South Korea. Another summit, Trump's second option, is inadvisable without proper preparation by negotiators. It also raises the risk of Trump walking into Kim's trap by concluding a hasty deal that takes some US troops out of South Korea, weakens regional stability and fails to verifiably stop or begin to roll back Pyongyang's nuclear weapons activities.

Or, another summit could be a deja vu moment, repeating their previous no-deal Hanoi meeting and resulting in an upset North Korean leader and continued missile launches and nuclear advancements.Â A modest deal, as a first step to a longer process, would be possible only if both leaders are open to compromises and if they are willing to put in the time to negotiate. Trump's third and best option, for the time being, is to giveÂ working-level negotiations a chance. Going this route won't be easy. Trump would have to accept that an early breakthrough isn't likely and prepare for a possible North Korean provocation if Pyongyang's deadline isn't met. Kim's regime is confident enough in the growing technological sophistication of its nuclear weapons that it's comfortable making unrealistic demands.

Kim, meanwhile, would have to empower his negotiators to actually negotiate a deal with Washington because Trump is likely the only American president who would be willing to meet with Kim and give Pyongyang far more benefits than ever imagined. He must also understand that Washington won't be fazed by a post-deadline provocation -- it will likely be met with a return to maximum pressure and deterrence, with a vengeance.

This means North Korea needs to allow negotiations to function properly and not just walk away from the table. Discussions in StockholmÂ on October 5Â with the US ended quickly because Pyongyang did not hear the exact words it wanted on a bargain. It's been seeking a trade-off within the tight boundaries of an agreement for the removal of sanctions in exchange for the dismantlement of the Yongbyon nuclear site -- the same deal on the table in Hanoi -- or for a halt to all joint military drills, for starters.

An alliance at a crossroads

Two of the three big issues related to South Korea -- the future of its GSOMIA intelligence pact with Japan, and how to split the cost for US troops on the Korean Peninsula. Despite its conditional postponement last week, Seoul still wants to terminate GSOMIA unless Tokyo changes its attitude towardÂ recent bilateral spats with deep historical roots. While these are complex issues for both sides, ending the agreement would make information sharing and monitoring of North Korea's missile program more difficult.

If we return to the days of "fire and fury" -- when many were worried that all the bluster and threats could spiral into inadvertent conflict -- ending GSOMIA would prevent timely coordination and action among the US, South Korea, and Japan. On top of this,Â Trump's demandÂ that Seoul pay 400% more in 2020 for hosting 28,500 US troops on the Peninsula could fuel anti-American sentiment in South Korea. Seoul is unlikely to pay the full amount.

If, in response, Trump orders even a partial troop removal from Korea to please his political base ahead of US presidential elections in 2020, it could exacerbate already tense relations with a key ally, weaken allied defenses against North Korea, tempt Seoul and Tokyo to reconsider their own nuclear weapons options, and send a bad message to Japanese and European allies. As a result, America's influence and interests in the world would erode. One miscalculation in any one of these issues will impact the others, exposing South Korea, Japan, and American soldiers and expatriates to dire military and geopolitical dangers. It would also deliver an easy win for North Korea, China, and Russia.

Washington needs to restore its alliance relationships in Asia while working together to deprive North Korea of nuclear weapons and establish peace on the Korean Peninsula.