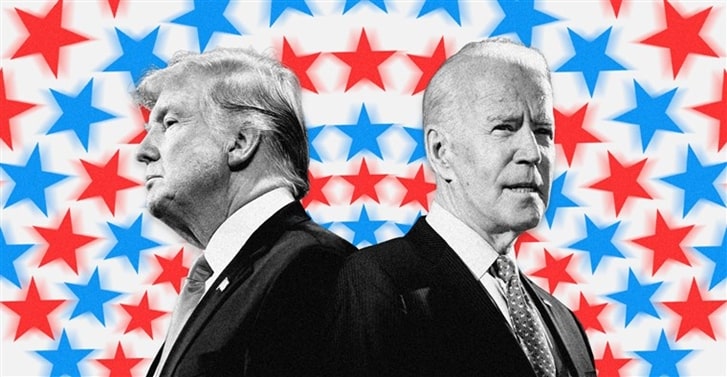 President Donald Trump was leading Democratic rival Joe Biden in the vital battleground state of Florida on Tuesday and in several other competitive swing states that will help decide the election, including North Carolina, Ohio and Texas. Fox News network projected Trump would win Florida, a state seen as a must-win in his quest for the 270 Electoral College votes needed to win another four years in the White House. Biden, searching desperately for states to recapture from Trump, was eyeing the so-called âblue wallâ states of Michigan, Wisconsin and Pennsylvania that sent Trump to the White House in 2016, but vote counting could stretch for hours or days there.

Trump held early leads in those three states, but much of that was built on Republican-heavy Election Day voting. The counting of mail-in ballots in all three states was expected to take hours or days. In Wisconsin and Pennsylvania, mail-in ballots cannot be processed until Election Day. Fox News projected Biden would win Arizona, giving him a potential path to victory with the âblue wallâ states. Supporters of both candidates called the election a referendum on Trump and his tumultuous first term. Trump monitored election returns with members of his family in the living room of the White House residence. Going in and out of the room were first lady Melania Trump, his son-in-law Jared Kushner and his daughter Ivanka among others. âHeâs calm, chilling,â said a source familiar with the scene.

A senior Trump aide, watching returns at the White House, described the mood there in a text: âGood. But nervousâ

In the East Room of the White House, where 200 Trump supporters were having drinks and eating chicken fingers, sliders and cookies, cheers broke out when Fox News called Florida for Trump, said a source in the room.

Voters were also to decide which political party controls the U.S. Congress for the next two years, with Democrats narrowly favored to recapture a Senate majority and retain their control of the House of Representatives. There were no early surprises as the two contenders split the U.S. states already projected. Trump captured conservative states like Alabama, Indiana, Kentucky and Tennessee while Democratic-leaning Connecticut, Massachusetts, New York and Vermont went to Biden, according to projections by television networks and Edison Research.

None of the approximately dozen battleground states that will decide the race had been settled as polls closed in most U.S. states, although Trump was moving into a lead in many of them. In Florida, Trump was leading Biden 51.2% to 47.7% with 94% of the expected votes counted. Electoral College votes are assigned to each state, in part based on their population. Trumpâs strong performance in Florida was powered by his improved numbers with Latinos. His share of the vote in counties with large Latino populations was larger than it was in the 2016 election. For months there had been complaints from Democratic Latino activists that Biden was ignoring Hispanic voters and lavishing attention instead on Black voters in big Midwestern cities. Opinion polls in key states showed Biden underperforming with Latinos in the weeks leading up to the election.

Many younger Hispanics were ardent supporters of U.S. Democratic Senator Bernie Sanders during the partyâs primary campaign, but in opinion polls expressed little enthusiasm for Biden, viewing him as too moderate and out of touch. In the Miami area, Latinos are predominantly Cuban Americans, where generations of families have fled communist rule in Cuba. Trumpâs messaging about Biden being a socialist seemed to work with them and with Venezuelans there despite Bidenâs denials. Edisonâs national exit poll showed that while Biden led Trump among nonwhite voters, Trump received a slightly higher proportion of the non-white votes than he did in 2016. The poll showed that about 11% of African Americans, 31% of Hispanics and 30% of Asian Americans voted for Trump, up 3 percentage points from 2016 in all three groups

Edisonâs national exit poll also found that support for Trump declined by about 3 points among older white voters, compared with 2016, while it rose by about 15 points among older Latinos and by 11 points among Black voters between 30 and 44. The poll found Biden made significant gains in the suburbs. In 42 suburban counties spread across 13 states where most of the votes had been counted, Biden was doing about 5 percentage points better than Clinton did in 2016 and than Barack Obama did in 2012. Biden, 77, still has multiple paths to the 270 Electoral College votes he needs to win without Florida, despite having spent lots of time and money trying to flip the state that backed Trump, 74, in 2016. But Biden was trailing in the battleground state of North Carolina, where Trump led 49.9% to 48.8% with 93% of expected votes counted. Trump also moved out to leads in Ohio, Texas and Georgia, all battleground states he won in 2016 but Biden had hoped to recapture from him this year. U.S. stock futures jumped late on Tuesday. S&P emini futures were last up 1.9%, extending a rally during the official trading session in which the S&P 500 delivered its strongest one-day gain in almost a month.

âMarkets have taken a step back from the Democratic sweep scenario,â said Stephen Innes, Chief Global Markets Strategist at Axi.

On betting website Smarkets, odds reflected a 74% chance of Trump winning, up from 33% earlier in the day. Voters, many wearing masks and maintaining social-distancing to guard against the spread of the coronavirus, streamed into polling places across the country through the day, experiencing long lines in a few locales and short waits in many other places. There were no signs of disruptions or violence at polling sites, as some officials had feared.

The winner will lead a nation strained by a pandemic that has killed more than 231,000 people and left millions more jobless, racial tensions and political polarization that has only worsened during a vitriolic campaign. Biden, the Democratic former vice president, put Trumpâs handling of the pandemic at the center of his campaign and has held a consistent lead in national opinion polls over the Republican president. But a third of U.S. voters listed the economy as the issue that mattered most to them when deciding their choice for president, while two out of 10 cited COVID-19, according to an Edison Research exit poll on Tuesday. In the national exit poll, four out of 10 voters said they thought the effort to contain the virus was going âvery badly.â In the battleground states of Florida and North Carolina, battleground states that could decide the election, five of 10 voters said the national response to the pandemic was going âsomewhat or very badly.â The poll found that nine out of 10 voters had already decided on their choice before October, and nine out of 10 voters said they were confident their state would accurately count votes.

The poll found signs Trump was losing support among his core base of supporters in Georgia. In anticipation of possible protests, some buildings and stores were boarded up in cities including Washington, Los Angeles and New York. Federal authorities erected a new fence around the White House perimeter. Trump is seeking another term in office after a chaotic four years marked by the coronavirus crisis, an economy battered by pandemic shutdowns, an impeachment drama, inquiries into Russian election interference, U.S. racial tensions and contentious immigration policies. Biden is looking to win the presidency on his third attempt after a five-decade political career including eight years as vice president under Trumpâs predecessor, Barack Obama. Biden has promised a renewed effort to fight the public health crisis, fix the economy and bridge Americaâs political divide. The country this year was also shaken by months of protests against racism and police brutality.