Trump made 50 false claims last week, 13 about the whistleblower 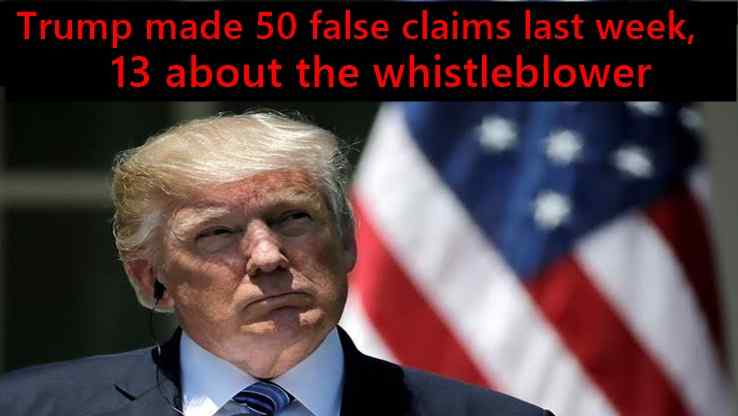 Fifty false claims from the President in seven days is not good, per se, but it is an improvement from his recent barrage of dishonesty, which includedÂ an October week of 129 false claims.

Trump made 16 of the 50 false claims at his campaign rally in Mississippi. He made 11 on Twitter.

The most egregious false claims: On the whistleblower

The whistleblower who complained about Trump's Ukraine-related behavior has been the primary target of his multi-frontÂ effort to rewriteÂ the reality of the story.

The most revealing false claim: The Dunns' non-meeting

Trump, a former reality television star who has demonstrated better instincts for drama than for empathy, apparently tried to stage a surprise encounter between Anne Sacoolas, the wife of an American diplomat, and the parents of Harry Dunn, the British 19-year-old who was killed in a car crash in which police believe Sacoolas was involved.

The Dunns had accepted an invitation to the White House. They were aghast, though, when Trump unexpectedly told them Sacoolas was also in the building, and they declined Trump's offer to bring her into the room.

There was never a meeting set up, said family spokesman Radd Seiger, who told CNN that Trump's claim was "a lie."

The most absurd false claim: The CNN camera

We've alreadyÂ delvedÂ into this one, so we won't belabor the point, but let's think about it one more time.

The President looked at his supporters at the Mississippi rally, pointed at the back of the room, and told them he had just seen something: the light on CNN's camera being turned off as he criticized CNN.

He had not seen that. CNN's photojournalist on the scene has his "tally light" permanently set to off, so it is never visible, and he never stopped recording as Trump was speaking.

Trump lies a lot about policy and politics. To lie that he is seeing something he is not seeing is next-level weird.

Below is this week's full list of 50 false claims, starting with the ones we haven't included in a weekly update before: