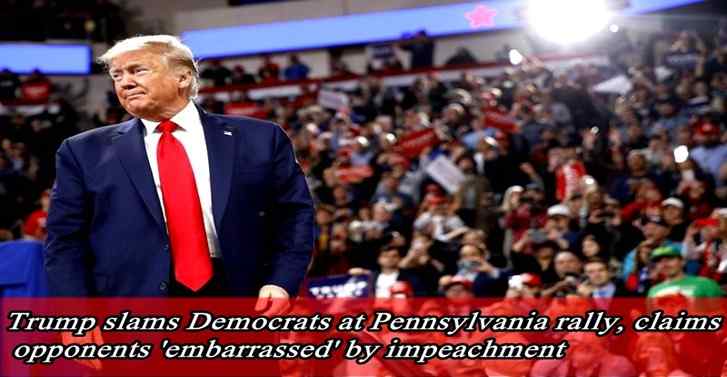 Â PresidentÂ Donald Trump lashed out at DemocratsÂ during a high stakes rally in battlegroundÂ Pennsylvania on Tuesday, claiming Democrats are "embarrassed" by their decision hours earlier toÂ unveil articles of impeachment against him.Â Â "Theyâre embarrassed by the impeachment," Trump said, turning to the issue minutes after taking the stage in Pennsylvania â a critical state for his 2020 campaign.Â Â

Trump went on to describe the impeachment as "flimsy" and "pathetic."Articles of impeachment are not the same as criminal charges, but Trump signaled during an extended riff at the Hersheyrally that he will try to undermine the impeachment drive-by arguing he did not commit a crime. Â Â

Hours earlierDemocrats unveiled two articles of impeachment. One accused him of abusing his powerÂ by withholding aid from Ukraine as leverage to pressure Kyiv to dig up dirt on Democrat Joe Biden. Another accused the president of obstructing justice by blocking officials from testifying in the inquiry.Â Trump opened his rally remarks in Hershey by noting another major development in Washington: House Speaker Nancy Pelosi announced a deal on an agreement to replace the North America Free Trade Agreement. The president framed the announcement on theÂ U.S. Mexico Canada Agreement as a diversion.Â

"It plays down the impeachment," Trump said.Â

Trump, Democrats strike deal on revised trade pact with Mexico, CanadaThe Hershey rally, scheduled before the timing of the impeachment articles was clear, marked something of a return to swing states for Trump, who in recent months had been turning up in GOP strongholds like Louisiana and Kentucky for candidates in competitive gubernatorial races.

Trump carried Pennsylvania byÂ 44,292Â votes in 2016 by racking up huge margins in rural parts of the state and flipping other areas in the west. Like at other rallies, Trump touted the nation's economy and low unemployment. He accused Democrats of out-of-touch immigration policies. And he went after his Democratic challengers for president as too liberal for the country.Â

The rally was Trumpâs first since theÂ Justice Department inspector general released a report about the origins of the investigation into the 2016 election. Trump took the opportunity to suggest that the report's findings validated his earlier claims of political bias at the Justice Department.Â

"They spied on our campaign," Trump said. "It was all a frame-up, a setup."The report found the controversial surveillance of a former Trump campaign adviser was riddled with errors but also found that the FBI was, in fact, justified in launching its inquiry into Russiaâs interference. That investigation was ultimately subsumed by special counsel Robert Mueller's probe, which found no evidence of collusion between Russia and the Trump campaign.Â

Home to the nation's best-known chocolatier, Hershey sits in a county that narrowly backed Hillary Clinton in 2016 but the part of the county where Trump rallied is politically more in tune with neighboring areas that supported Trump by huge margins, helping to offset his losses in Philadelphia. The rally drew supporters from all over Pennsylvania, though, as well as from other states.Â Republicans said the president's support remains strong in the region and the campaign has long argued the Democratic impeachment drive will help fire upvoters. Polls have showed the nation is largely divided about impeachment.Â

Lawrence Tabas, chairman of the Republican Party of Pennsylvania, said that jobs remain at the forefront of voters' minds, not impeachment.Â "He's got a record on the economy," Tabas said. The economy is growing so quickly in portions of Central Pennsylvania,Â Tabas said, "it's almost too late to invest in some of these counties."Â Â

AsÂ they waited in the rain in a massive lineÂ that inched into the 10,500-seat Giant Center, several Trump supporters rolled their eyes when asked about Democratic articles of impeachment. Echoing the president's own assessment, some said Democrats were bent on attacking Trump and predicted it would backfire in 2020.Â

Supporters say impeachment is a sham, joke, disgrace to the nation

"We hope it does," said Susan Dow, an aftercare worker who lives in Bucks County, a Philadelphia suburban battleground Hillary Clinton barely won in 2016. "TheÂ facts are not there. They're just making this up as they go along. There's no facts to it."Attending her first Trump rally and joined by her husband and daughter, Dow said she supportsÂ the president because of the economy. She said she lamented that her daughter's generation has struggled to enter the economy as easily as she did.Â

"This generation has had to have five people share their apartment to make ends meet," Dow said. "Trump is changing all that."Â Cindy Robinson, another Trump supporter attending the rally,Â jumped on the Democratic impeachment drive without prompting. The 62-year-old retired woman, who lives about an hour's drive southwest of Hershey, blasted Democrats for "not allowing Trump to do the job that we voted him into office for." Asked about Trump's interactions with Ukraine at the heart of the impeachment effort,Â Robinson said they were beside the point.Â

"Why are they so concerned about that country?" Robinson said. "They're not even willing to fix the border and protect the American people who are already here ".

Despite the huge political significance of Central Pennsylvania,Â Trump rallies draw supporters from far distances and Tuesday's event was no exception. John Kircher traveled to Hershey fromÂ Pittsford, N.Y.,Â to attend his first rally. Decked out in head-to-toe hunting gear and puffing on a cigar, Kircher said it wouldnât be his last rally.Â

âThis impeachment is just a scam," he said. "Theyâve wanted to impeach him since the day he was elected.â