Trump vs. Iran: It's not over 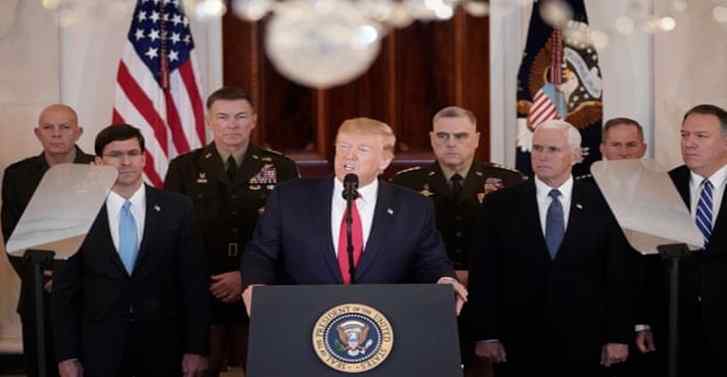 Though President DonaldÂ Trump's showdown with Iran mercifully ended shortÂ of a full-blown war, the near miss did nothing to defuse a confrontation almost certain to boil up again soon.WhileÂ both sides can claim strategic advances and political payoffs, the riskiest standoff between the enemies in decades may have transitioned their confrontation to a new, more dangerous phase.That's because theÂ structures of conflict and the diplomatic disconnectÂ between revolutionary Iran and a nationalistic US administration that tore up the nuclear deal involving both countries are still in place.The showdown uncorked a fierce controversy in Washington,Â where there's a widening partisan dispute over Trump's rationaleÂ for the killing of Iranian Gen. Qasem Soleimani, which sparked the crisis.The weeklong scare also left a chilling memory of how the impulsive choices of a seat-of-the-pants President brought his nation to theÂ cusp of another war in the Middle East. It's possible Trump might learn the wrong lessons from his brinkmanship.And the drama exposed the failings of a gutted national security team staffed largely by inexperienced or deeply ideological officials apparently prone to confusion and mixed messages.On the upside, tensions that culminated in Trump's evaluation that Iran was "standing down" after not killing any Americans in strikes at bases in Iraq did not spin out of control. Both sides were apparently able to telegraph their intentions, through public rhetoric and a Swiss diplomatic channel, to avoid miscalculations that could have spilled over into a war.While there are hopes that stepping back from the brink will give each side an incentive to kick off a fresh diplomatic process, it's more likely they will return to the same state of mutual loathing that has prevailed for 40 years.Iraq is still on edge -- a brace of rockets landed in the highly fortified Green Zone of Baghdad on Wednesday -- the area that hosts the US Embassy, which was previously attacked by a pro-Iran mob.The drones and missiles may have been pulled back for now, but it would be naive to assume this episode is over. Events in the Middle East take months and years to play out. And Iran's history suggests that it will not view a limited missile strike as sufficient vengeance for the killing of a top leader like Soleimani -- who headed the elite Quds Force of Iran's Islamic Revolutionary Guard Corps, meaning more proxy militia violence is likely."I think that anybody who tells you that this is over and that the retaliation has now ceased and we can all make assessments based on where we are right now ... that's very unlikely. The story is far from over," said Susan Hennessey, a former National Security Agency attorney who is now a CNN legal analyst, on "The Situation Room."

Still, after looking like he was talking the United States into the kind of Middle East quagmire he decried as a candidate, Trump was glad to step back on Wednesday."Iran appears to be standing down, which is a good thing for all parties concerned and a very good thing for the world," he said at the White House.The President's team, eyeing his reelection race, has material to work with. They will boast about how Trump, daring to take a step discounted by his predecessors as too inflammatory, wiped Soleimani, whom he blasted as a terrorist "monster," off the planet.More strategically, Trump may have established a principle that could be significant in future US-Iran tensions. The killing of Soleimani, who masterminded Iran's regional network of militia allies like Hezbollah and Hamas, signals that Washington now sees Iran's proxy activity as grounds for military action, a new threshold in the confrontation."There was a direct attack, direct assault on the US Embassy, US sovereign soil, by Iranian proxies," said David Urban, a senior Trump political adviser and veteran of the first Gulf War."This President, unlike presidents in the past, decided to say, 'No longer will the US allow Iran to attack the US via proxies,' " Urban told CNN's Christiane Amanpour.That new standard could be significant given Iran's record of using affiliated groups to attack US targets -- such as the assault on the US Marine barracks in Lebanon in 1983.But it could also be a trigger to a future conflict.