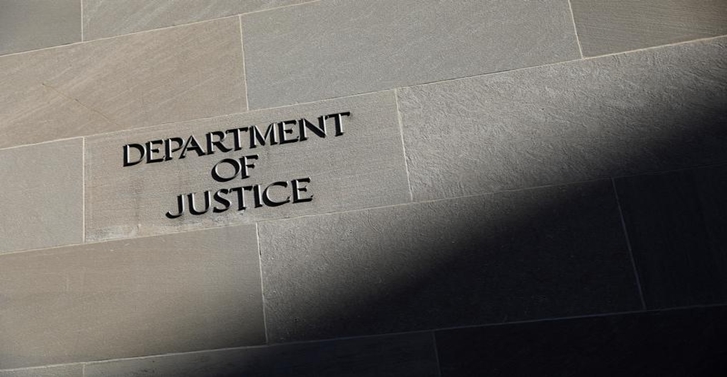 WASHINGTON (Reuters) - President Donald Trump met with nine Republican state attorneys general on Wednesday to discuss the fate of a legal immunity for internet companies after the Justice Department unveiled a legislative proposal aimed at reforming the same law.Trump met with attorneys general from Arizona, Arkansas, Louisiana, Mississippi, Missouri, South Carolina, Texas, Utah and West Virginia.Also Wednesday, the Justice Department, which is probing Google for potential breaches of antitrust law, held a call with state attorneys generalâs offices to preview a complaint to be filed against the search and advertising giant, perhaps as soon as next week, according to two sources familiar with the matter.It is normal for the department to seek support from state attorneys general when it files big lawsuits.Critics have accused Google, owned by Alphabet IncÂ GOOGL.O, of breaking antitrust law by abusing its dominance of online advertising and its Android smartphone operating system as well as favoring its own businesses in search.The Justice Department is expected to wait at least another week before filing the lawsuit as states review its case and decide whether to join, people familiar with the matter said.The White House said the legal immunity discussion involved how the attorneys general can utilize existing legal recourses at the state level - in an effort to weaken the law known as Section 230 of the Communications Decency Act, which protects internet companies from liability over content posted by users.After the meeting, Trump told reporters he expects to come to a conclusion on the issue of technology platforms within a short period. It was not immediately clear what conclusion he was referring to.He said his administration is watching the performance of tech platforms in the run-up to the Nov. 3 presidential election.âIn recent years, a small group of powerful technology platforms have tightened their grip over commerce and communications in America,â Trump said. âEvery year countless Americans are banned, blacklisted and silenced through arbitrary or malicious enforcement of ever-shifting rules,â he added.Trump, who himself frequently posts on TwitterÂ TWTR.N, said Twitter routinely restricts expressions of conservative views.

Earlier on Wednesday, the Justice Department unveiled a legislative proposal to reform Section 230. It followed through on Trumpâs bid earlier this year to crack down on tech giants after Twitter Inc placed warning labels on some of Trumpâs tweets, saying they have included potentially misleading information about mail-in voting.The Justice Departmentâs proposal would need congressional approval, and is not likely to see action until next year at the earliest. Unless the Republicans win control of the House of Representatives and maintain control of the Senate in the November elections, any bill would need Democratic support.The Justice Department proposal primarily states that when internet companies âwillfully distribute illegal material or moderate content in bad faith, Section 230 should not shield them from the consequences of their actions.âIt proposes a series of reforms to ensure internet companies are transparent about their decisions when removing content and when they should be held responsible for speech they modify. It also revises existing definitions of Section 230 with more concrete language that offers more guidance to users and courts.It also incentivizes online platforms to address illicit content and pushes for more clarity on federal civil enforcement actions.Attorney General William Barr said in a statement the administration was urging âCongress to make these necessary reforms to Section 230 and begin to hold online platforms accountable both when they unlawfully censor speech and when they knowingly facilitate egregious criminal activity online.âThe Internet Association, which represents major internet companies including Facebook IncÂ FB.O, Amazon.com IncÂ AMZN.OÂ and Google, said the Justice Department's proposal would severely limit peopleâs ability to express themselves and have a safe experience online.The groupâs deputy general counsel, Elizabeth Banker, said moderation efforts that remove misinformation, platform manipulation and cyberbullying would all result in lawsuits under the proposal.