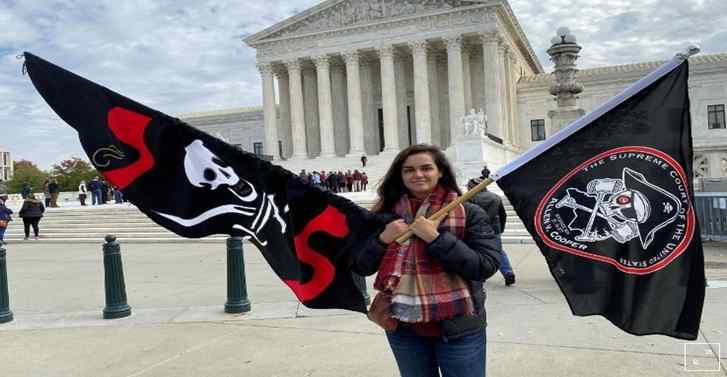 (Reuters) - The U.S. Supreme Court on Monday delivered a legal broadside to a filmmaker who documented the recovery of notorious English pirate Blackbeardâs wrecked ship, refusing to revive his video piracy lawsuit that sought monetary damages from North Carolina.The justices unanimously upheld a lower courtâs 2018 ruling that the state was protected by a legal doctrine called sovereign immunity and could not be sued for copyright infringement for using filmmaker Frederick Allenâs images online.Allen sued in 2015 in federal court, accusing the state of infringing his copyrights on five videos and a photograph of salvage operation for the historically significant ship, the Queen Anneâs Revenge, which went down in 1718 in the Atlantic Ocean off the coast of Beaufort, North Carolina.

The case tested the balance between the right of individuals to protect their creations through copyrights and the fact that states typically are shielded under the U.S. Constitution from lawsuits seeking damages through sovereign immunity.Allen said he was saddened by the courtâs decision and that his company, Nautilus Productions, would evaluate its options.âThe state of North Carolina routinely and vigorously enforces its own copyrights, yet simultaneously hides behind sovereign immunity when it violates the intellectual property rights of its own citizens,â Allen said.North Carolina Attorney General Josh Stein said he was pleased with the ruling. âThe court unanimously upheld longstanding precedents recognizing that all states retain certain core aspects of sovereignty, including sovereign immunity from copyright lawsuits,â Stein said.The case hinged on whether the Copyright Remedy Clarification Act, passed by the U.S. Congress in 1990 to allow states to be held liable for illegal copying, was valid.The Richmond, Virginia-based 4th U.S. Circuit Court of Appeals threw out the lawsuit in 2018, ruling that Congress overstepped its authority when it passed that law.

Writing for the court, liberal Justice Elena Kagan on Monday agreed, noting that there was no evidence of widespread copyright violations by states. However, Kagan said Congress could try to enact a better-tailored law to would stop states from illegally copying.âEven while respecting constitutional limits, it can bring digital Blackbeards to justice,â Kagan wrote.Blackbeard, whose name was Edward Teach, prowled the shipping lanes off the Atlantic coast of North America and throughout the Caribbean before being slain - shot, stabbed and decapitated - during an encounter with British naval forces at North Carolinaâs Ocracoke Inlet.Blackbeard ran the Queen Anneâs Revenge, his flagship, aground on a sandbar 58 years before the United States declared independence from Britain. By law, the ship and its artifacts are owned by the state of North Carolina. The three-masted vessel, roughly 100 feet (30 meters) long, was a French slave ship before being captured and renamed by pirates in 1717.

After the wreck was discovered in 1996, the state employed divers and scientists to excavate, preserve and study its artifacts while Allen spent years filming and photographing the recovery. Allen obtained federal copyright registrations on the videos and still images.Justice Stephen Breyer, joined by fellow liberal Ruth Bader Ginsburg, agreed with the ruling but only because he said the courtâs precedents dictated it. Breyer faulted those prior rulings for limiting congressional power to create laws that require states that pirate intellectual property to âpay for what they plundered.âAllen and Nautilus sued North Carolina in 2015 after state officials used some of the videos on YouTube and a photo in a newsletter. The state also passed a law converting the materials into public records.

Because of the coronavirus pandemic, the ruling was issued online only rather than the normal practice of the justices announcing opinions from the bench.