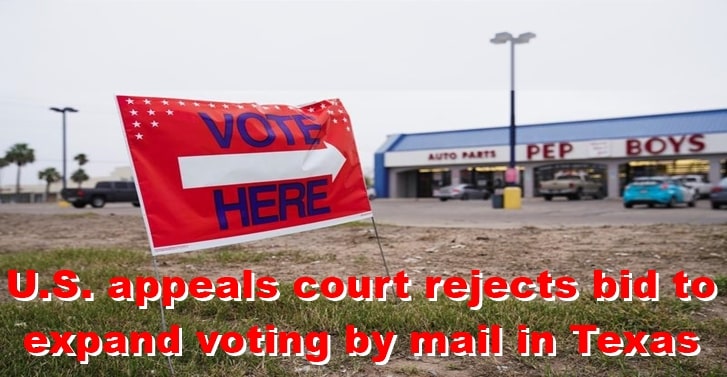 A U.S. appeals court on Thursday rejected Texas Democratsâ bid to allow all state residents to vote by mail due to the coronavirus pandemic, ruling that the stateâs law extending that right only to those over 65 was not unconstitutional age discrimination. A split three-judge panel of the 5th U.S. Circuit Court of Appeals vacated a lower courtâs preliminary ruling that had required the state to expand mail-in voting to all eligible voters.

The Texas case is just one of dozens of court challenges across the country over whether to expand voting rights in light of the pandemic. President Donald Trump, a Republican, has asserted without evidence that voting by mail will result in fraud, although many states have used the practice for decades with no major problems. Texas law allows voters over age 65, as well as those with certain disabilities, who are ill, absent from their home counties or confined to jail, to vote by mail. In a separate case, the stateâs high court ruled in May that the risk of contracting the novel coronavirus was not in itself a valid reason to allow mail-in ballots. The 5th Circuitâs majority said the stateâs law did not violate the U.S. Constitutionâs prohibition on age discrimination because it merely conferred an extra benefit on older residents, rather than limiting the right to vote for younger Texans.

âA law that makes it easier for others to vote does not abridge any personâs right to vote,â the majority wrote.

In dissent, U.S. Circuit Judge Carl Stewart said the law hurt younger voters by limiting their options during a public health crisis. Thursdayâs ruling does not end the lawsuit. The case will return to a lower court to consider the Democratsâ remaining arguments against the law.

âThe Texas Democratic Party will continue to fight in the district court for every Texan to have an equal right to vote, regardless of their age,â Chairman Gilberto Hinojosa said in a statement. Texas Attorney General Ken Paxton, a Republican who defended the state in the lawsuit, said in a statement: âWe will continue to protect the integrity of Texas elections and uphold the rule of law.â