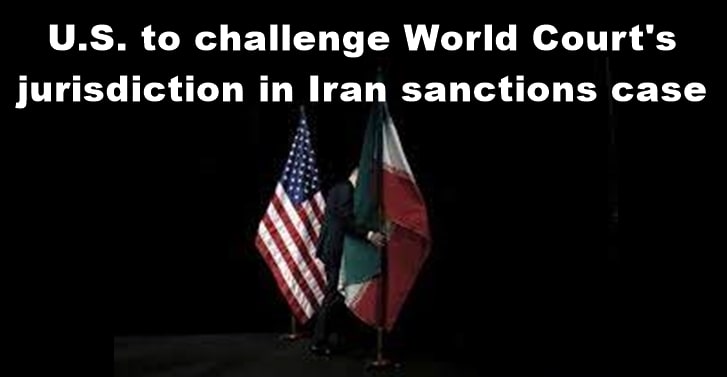 Lawyers for the United States are expected on Monday to reject the jurisdiction of the U.N.âs highest court to resolve a case brought by Iran seeking to lift U.S. sanctions against Tehran. Iran brought the claim to the International Court of Justice (ICJ), also known as the World Court, in 2018, asking the court to order Washington to lift sanctions against Iran because they breach a decades-old friendship treaty. Washington has maintained that the real aim of Iranâs legal suit is to restore a 2015 nuclear pact opposed by the administration of President Donald Trump.

Tehran argues that the sanctions, imposed by Washington when it abandoned the 2015 pact aimed at preventing Tehran from developing nuclear weapons, violate their 1955 âTreaty of Amityâ, or bilateral friendship agreement.

After Iran filed two cases based on the treaty against the U.S. at the World Court, Washington announced it was officially withdrawing, but that move was not retroactive and has no effect on this ongoing case. Hearings this week in The Hague will only deal with the preliminary matter of whether the court has jurisdiction to hear the dispute. In an earlier case involving Iranian assets frozen by the U.S., the World Court ruled in 2019 that the friendship treaty could provide a legal basis for calling in the top U.N. court in an Iran-U.S. dispute. In October, 2018, the court ordered the U.S. to ensure that the sanctions against Iran did not affect humanitarian aid or civil aviation safety.

The ICJ is the United Nationsâ highest court for resolving disputes between nations. Its rulings are binding, but it has no power to enforce them, and the United States and Iran are both among a handful of countries to have ignored its decisions. The treaty was signed before Iranâs 1979 Islamic revolution and the sharp deterioration in bilateral ties with Washington.