US Attorney General Barr to Testify Before House in July 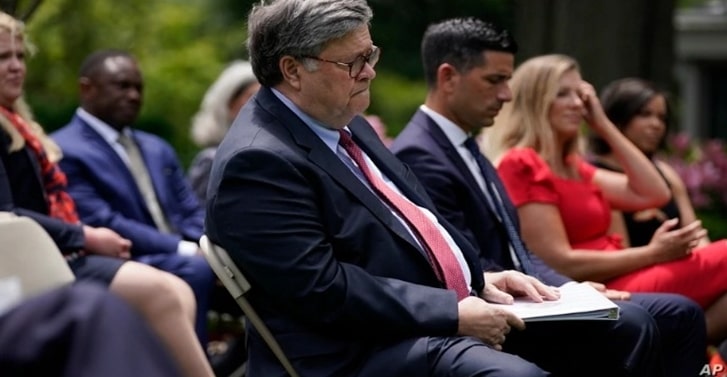 A U.S. JusticeÂ Department spokesman said Wednesday U.S. Attorney General William Barr has agreed to testify before the U.S. House Judiciary Committee next monthÂ as the panel probes the alleged politicization of the department.Â The Democratic-led panel has been conducting hearings regardingÂ how Barr and hisÂ Justice departmentÂ have interfered with investigations into possibleÂ wrongdoingÂ by U.S. President Donald Trump or issuedÂ rulingsÂ favorable toÂ the president.Â In a hearing Wednesday, the panel heard from two current federal prosecutors who testified aboutÂ allegedÂ pressureÂ and influence they witnessed first-hand by from the attorney general.Â Federal prosecutor AaronÂ Zelinksy told the hearing that the U.S. Attorney's office in Washington was pressured from the "highest levels" of the Justice Department to scale back its sentencing recommendation for President Donald Trump's longtime friend, Roger Stone.Â

In his opening remarks, Judiciary Committee Chair Jerry Nadler said Barrâs âwork at the Department of Justice has nothing to do with correcting injustice. He is the presidentâs fixer. He has shown us that there is one set of rules for the presidentâs friends, and another set of rules for the rest of us.âÂ Republicans on the Committee spoke out in defense of Barr.Â When BarrÂ testifies, one case the committee will no doubt questionÂ himÂ about concerns Former Trump National Security Advisor Michael Flynn.Â Â Â Last month, BarrÂ issued aÂ decisionÂ to drop charges against Flynn, who had been convicted of lying to the FBI about his contacts with Russiaâs ambassador.Â Earlier Wednesday a U.S. Court of Appeals upheld theÂ justiceÂ department'sÂ decisionÂ after a judge chose not to immediatelyÂ act on the decision.Â Barr was named attorney generalÂ last year, replacing Jeff Sessions.Â