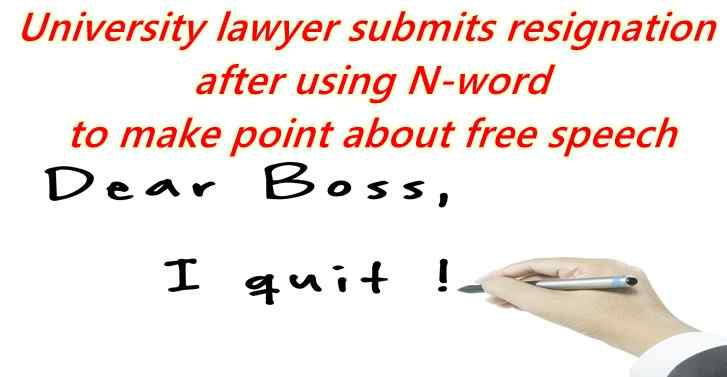 An assistant general counsel for the University of North Texas submitted her resignation Friday after an outcry over her use of a racial epithet at an event to discuss hate speech.

âIf you walk into the Dean of Students office and start screaming obscenities about, âF this place, F all of you, yâall are all f-ing stupid,â they can escort you out and do that immediately,âSewell said the student using the F-word in her example was not protected because he or she was not in a public forum. Sewell did not use the F-word, although she did use the racial slur.

Several people at the event condemned Sewell for using the epithet. One of them was Yolian Ogbu, the schoolâs student government association president.

âWeâre living in a white supremacist system, we have to understand that,â Ogbu said during a panel discussion. âAnd because of that, we constantly have people like us â¦ that feel a certain type of way when someone says that word. If it wasnât that big of a deal, I wouldnât be saying anything right now. But it is, and the fact that weâre at this point â¦ is disturbing.âUniversity of North Texas Chancellor Lesa Roe and President Neal Smatresk issued a statement on Twitter.

âWe strongly believe in a culture that embraces, and vehemently defends, inclusion,â they said. âWhile Ms. Sewell was trying to make a point about First Amendment speech, the references used are never condoned in our community, which prides itself on our diversity and caring nature.â